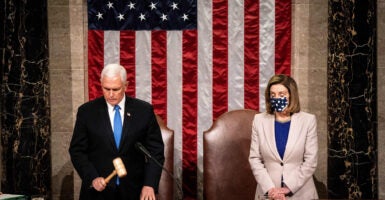 Much of the Democrats' eagerness for abolishing the Electoral College dissipated in January after one of their own became president. Pictured: Then-Vice President Mike Pence and House Speaker Nancy Pelosi preside over a joint session of Congress to certify the 2020 Electoral College results, ratifying Joe Biden's 306-232 win over then-President Donald Trump. (Photo: Erin Schaff/ Agence France-Presse/Getty Images) 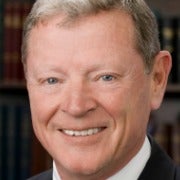 Ever since George W. Bush defeated Al Gore in 2000, sore loser Democrats have been trying to destroy the Electoral College, so this isn’t an empty or even a new threat.

A poll from 2019 revealed 60% of Democratic voters wanted to abolish the Electoral College—and just 21% want to keep it.

Just last year, Sen. Dick Durbin, D-Ill., said, “We need to abolish the Electoral College,” and followed that up by introducing legislation, S.J. Res. 17, to do just that.

Today, they are nearly three-quarters of the way to getting support from enough states to control 270 electoral votes. Their supporters are pushing hard in states, such as Nevada, North Carolina, Oklahoma, Maine, and Arizona, this year to try to enact legislation to join the compact.

Once they reach enough support to control 270 electoral votes, they claim the compact will take effect.

Not only does this compact have serious constitutional questions, it also strikes at the Founders’ view of a representative government. They wanted our national elections to represent the view of the entire nation, not just a few coastal elites.

Consider this: Democratic presidential nominee Hillary Clinton may have prevailed in the popular vote in 2016, but she carried just 487 counties in the entire country. Compare that to President Donald Trump, who carried 2,626 counties and the Electoral College.

You tell me which candidate better reflected the will of the entire country? That’s the outcome our Founders wanted.

Other attempts to weaken the Electoral College come when members of Congress attempt to assert influence or control over elections, rather than adhering to the constitutional mandate that it be left to the states.

We saw that in the vote to protect state-certified results of the 2020 election on Jan. 6. Had Congress voted to overturn the votes cast by the Electoral College, it would have federalized the presidential election process that delivered Trump the presidency in 2016.

Without the Electoral College, our national elections would become a coastal affair. Just nine states—including the liberal bastions of New York, Illinois, and California—make up more than 50% of our population and would strip away the voices of Oklahomans, North Dakotans, Alaskans, Arizonans, and many others.

Standing up for the Constitution shouldn’t be a partisan issue—but for some reason it is.

Every single one of the 15 states that have enacted the National Popular Vote Compact has Democratic control of its legislature and governor’s mansion. Democrats are the ones in Congress trying to abolish our representative government because they want to rig the rules so Republicans can’t win elections.

Conservatives need to unite around protecting the role of the states in elections, but also on pushing back against the efforts to weaken the Electoral College or federalizing our elections.

The need to defeat the anti-democratic HR 1, the so-called For the People Act, which amounts to a federal takeover of elections, is one example. We also shouldn’t attempt to penalize or primary Republicans who took the constitutional vote on Jan. 6 to uphold the states’ role in elections.

The ability of larger states to dominate the voices of smaller ones was unacceptable to the Founding Fathers, just as it should be unacceptable to all who value our republic. The Electoral College protects the diverse views of our many states and deserves our protection.

As we look ahead to 2022 and 2024, I’ll fight for the Electoral College and for candidates across the country who will join me in defending it.