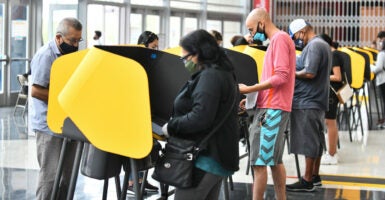 There is no suppression going on of anyone’s votes anywhere in the country. Anyone who says otherwise is just making it up.

The Census Bureau’s recent release of its 2020 election survey of voters clearly demonstrates that those who have been claiming, without justification or evidence, that we have been experiencing a wave of so-called voter suppression have a lot of explaining to do.

Instead, the Census Bureau reports that the turnout in last year’s election was 66.8%—just short of the record turnout of 67.7% of voting-age citizens for the 1992 election. It beat the turnout in President Barack Obama’s first election, which was reported as 63.6% by the bureau.

Harris made that false claim about “voter suppression” in September last year when she was running for office. Yet the census survey shows that there was higher turnout among all races in 2020 when compared to the 2016 election. Black Americans turned out at 63%, compared to 60% in 2016.

Gupta has repeatedly made the same dishonest claim about “voter suppression” and an “assault” on voting rights. But 59% of Asian Americans voted in 2020, a 10-percentage point increase from 2016 when 49% turned out to vote.

Only 47% of Asian Americans voted in 2008 and 2012 when Obama ran for office and was reelected, including during a period when Gupta was in charge of the Civil Rights Division at the Justice Department and was supposed to be protecting voting rights.

Clarke, the radical who has been nominated by President Joe Biden to head the Civil Rights Division, has also made the same deceptive claim about “voter suppression,” including states that, she claims, are “making it harder to register to vote.”

Holder propagandized about “voter suppression” in 2020, claiming efforts to improve election integrity are “anti-democratic, anti-American.” Hispanics obviously disagreed with him since they turned out at 54% in 2020, compared to only 50% of Hispanics who voted in 2008 when his boss was elected.

And Hispanic turnout actually dropped during Holder’s tenure as attorney general from 2009 through 2015, falling to 48% in the 2012 and 2016 elections.

So you mean to say that with the Trump administration running the Justice Department, Hispanic turnout actually jumped up 6 percentage points in 2020? Doesn’t sound very anti-democratic or anti-American to me.

What does sound anti-democratic and anti-American is trying to scare and manipulate the general public with fabricated stories about “voter suppression.”

Abrams has been spouting nonsense about Georgia, the American election system, and “voter suppression” since she lost her race for governor in Georgia in 2018. This despite record registration and turnout numbers ever since Georgia’s voter photo ID law went into effect in the 2008 election; black and Hispanic turnout skyrocketed compared to the 2004 presidential election.

It is, of course, hard to make such deceptive claims when Hispanics made up 11% of the total turnout in the 2020 election, up from only 9% in 2016. But that certainly has not stopped those who reflexively recite the “voter suppression” mantra to a gullible crowd, including many in the media and corporate executive suites.

The bottom line of the Census Bureau’s survey is that Americans are easily registering—when they want to—and they are turning out to vote when they are interested in the candidates who are running for election.

In fact, in an election year in which we were dealing with an unprecedented shutdown of the country due to a pandemic, we had, according to the Census Bureau, “the highest voter turnout of the 21st century.”