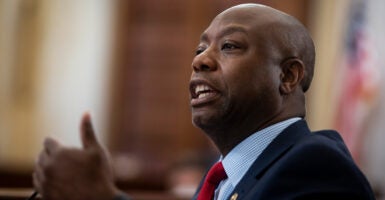 Devon Westhill is president and general counsel of the Falls Church, Va.-based Center for Equal Opportunity.

Have some respect, black people—if not for Sen. Tim Scott, then for yourselves.

It turned my stomach to see “Uncle Tim”—a play on Uncle Tom—trend on Twitter in response to the brilliant speech by Scott, R-S.C., last Wednesday night. Scott delivered the Republican response to President Joe Biden’s address to a joint session of Congress.

The attacks made me sick, not just because I have faced similar racist attacks myself, but also because this is representative of a rot in the American black experience.

I don’t deny the possibility of bots, trolls, and fake accounts on Twitter being used to sow division among the American people. However, for “Uncle Tim” to trend on the platform suggests that a lot of black people are lodging a hateful slur against a U.S. senator because he is black and thinks differently than they do.

This is an act of black people sowing division among ourselves.

This is oppression. It’s tyrannical and racist to demand one relinquish his or her intellectual freedom because of the color of his or her skin. Moreover, it’s a horrifying and shameful fact that generations of black children have been indoctrinated to believe intellectual conformity is right and a good thing—so much so that many found it righteous to publicly attack Scott for thinking differently.

To be fair, one might genuinely believe that what Scott spoke about in his speech was against the interest of black Americans and, therefore, deserving of criticism. But it wasn’t and isn’t.

One line, for example, that has some people in a tizzy is Scott’s firm affirmation that “America is not a racist country.” In the old-school sense of the word “racist,” that is obviously true, notwithstanding the best efforts of some companies, governments, and other institutions to implement policies based on race.

Long gone are the days of state-mandated separate and unequal lunch counters, water fountains, and swimming pools. It is an affront to the civil rights pioneers in this country—who faced all manner of atrocities, including death—to compare current racial disparities to the overt and vicious racial discrimination they faced. But that’s what attributing achievement gaps among the races to “systemic racism” or “institutional racism” does.

Instead of portraying America as the racist country of yore as the radical left does, all of us, especially black Americans, should celebrate that it very clearly is not. So, why shouldn’t a U.S. senator do that?

Perhaps the answer lies in another part of Scott’s supposedly traitorous speech. That is, that “people are making money and gaining power by pretending we haven’t made any progress at all” on race relations.

However, it’s manifest that relations between the races have improved. As Jason Riley, who is black, writes in The Wall Street Journal, it’s also empirically true. The real question is, how far have we black Americans come in relations with ourselves?

Don’t misunderstand: To say that America isn’t racist or that we’ve made progress in race relations is not the same as saying America has no racists. My fellow black tweeters prove that point.

Let’s not work so hard to tear ourselves and our brothers and sisters down. That does nothing to create any progress toward closing achievement gaps that we all want to see addressed.

It’s important to have an array of ideas on the table to do that—even conservative ideas.

It’s long past time for us to stop saying that a black person who doesn’t support leftist ideas is somehow a “race traitor.” Or, as Joe Biden put it more bluntly in May 2020: “You ain’t black!”