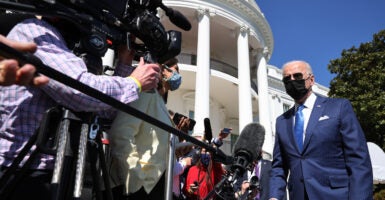 The three broadcast TV networks have done an about-face in their coverage of the president since Joe Biden took office, airing mostly positive stories, compared with their mostly negative treatment of his predecessor, Donald Trump, a new study found.

During the first 80 days of the Biden administration, the broadcast networks’ evening newscasts gave it 59% positive coverage. By comparison, 89% of stories during the same period, Jan. 20 through April 9, of the Trump presidency in 2017 were negative, according to a new study by the Media Research Center, a conservative-leaning media watchdog group.

Media Research Center analysts reviewed the evening news coverage by ABC, CBS, and NBC of the fledgling Biden administration and found it totaled about 726 minutes, or about 18% of all evening news airtime during the period reviewed.

The majority of news coverage of Biden pertained to the federal government’s COVID-19 response, his $1.9 trillion coronavirus relief spending bill, and the illegal immigration crisis at the southern border.

The administration’s handling of the coronavirus pandemic was covered the most, with 242 minutes (one-third) of the total airtime. “[O]ut of 39 evaluative statements on this topic, 31 (or 79%) praised Biden and/or his team,” the report said.

The Democratic president’s $1.9 trillion COVID-19 relief bill drew 120 minutes of additional coverage. Out of 67 evaluative comments, the study found, 59 (86%) were positive. Only 29 seconds of airtime mentioned its impact on the federal deficit or the national debt, which has topped $28 trillion.

The crisis at the southern border drew 115 minutes of coverage. Out of 56 evaluative statements, just 10 (18%) were positive. That’s the only topic on which both administrations have received similar criticisms. A similar study from four years ago found 93% negative coverage of the Trump administration’s immigration policies.

About 650 minutes out of 726 (90%) of news coverage of the Biden administration examined policy issues, compared with 45% of Trump administration coverage during its early weeks.

The three legacy news outlets spent more than nine minutes on the disputed size of Trump’s crowd on Inauguration Day in 2017, and 19 minutes on Trump’s claim “that Hillary Clinton had benefited from illegally cast votes in the 2016 election.” They spent about 98 minutes of coverage on Trump’s assertions in March 2017 and thereafter that President Barack Obama’s administration wiretapped the Trump Tower late in the 2016 campaign.

By comparison, Biden’s insulting what he called Republicans’ “Neanderthal thinking” drew just 83 seconds of airtime. His encouragement of Major League Baseball to relocate the All-Star Game out of Georgia garnered only 45 seconds combined on the three news outlets. His claim that Georgia’s new election integrity law was like “Jim Crow” drew a scant 39 seconds of coverage, none of it negative.

The videos captured Charlie Chester, CNN’s technical director, saying he chose to work there because the network was focused on ousting Trump from office. Chester also said CNN played a role in electing Biden.