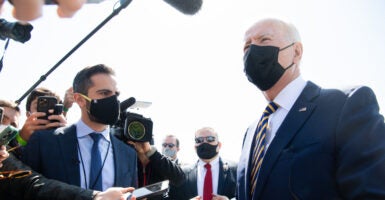 President Joe Biden speaks to the media after arriving on Marine One at the Ellipse near the White House in Washington, D.C., April 5. (Photo: Saul Loeb/AFP/Getty Images)

President Joe Biden averaged a 56% job approval rating from his inauguration through March, according to Gallup, about the same as the ratings of former Presidents Bill Clinton and George W. Bush, and much higher than former President Donald Trump’s (42%). One factor in that approval might be the tone of press coverage.

Rich Noyes and Bill D’Agostino of the Media Research Center studied ABC, CBS, and NBC evening news programs from Jan. 20 through April 9. Televised evaluations of Biden’s performance (not including politicians and administration officials) were 59% positive.

The tone would be even more positive except for one nagging problem: the crisis with surging illegal immigration at the southern border, which Team Biden denies is a crisis. The team dismisses it as a “right-wing talking point.” But it drew the most negative coverage, 82% negative. The TV “news” crews were much more positive about massive government spending for “COVID-19 relief” and “infrastructure.”

Four years ago, evening news evaluations of then-President Trump were 89% negative, a jarring contrast. Leftists on Twitter were hostile to the idea of comparing these presidents in any way.

Hollywood producer Steven DeKnight tweeted, “You can’t compare a pile of s— and bowl of petunias and say they both smell wonderful.” John Aravosis of AMERICAblog tweeted, “Now compare coverage of Stalin and Mother Theresa.”

That’s a fair representation of journalistic attitudes toward Trump and Biden. One’s a horrible monster; one’s a perfumed saint. No one said the tone or substance of their coverage should be exactly the same.

Coverage of Trump stayed this relentlessly negative because the “objective” press couldn’t abide any policy expert or citizen on the street saying something positive about him. But there are even more differences, including the following:

1. Biden’s much less prominent. Total coverage of him added up to 726 minutes, or 18% of all evening news airtime. That’s much smaller than the 1,900 minutes these shows devoted to obsessing over Trump during the same period in 2017.

2. Biden was barely evaluated. While Trump drew 1,687 evaluations in his first weeks, Biden was only evaluated 264 times, about 16% of the Trump total. Trump was criticized far more than Biden was praised. This signals that Biden wasn’t controversial enough to evaluate. His reign was accepted and acceptable.

3. Trump was a rolling scandal. “Roughly 90% of network news coverage of the Biden administration (650 minutes out of 726) was spent on policy issues; that compares to just 45% of Trump administration coverage during those early weeks,” Noyes and D’Agostino wrote. Months before former special counsel Robert Mueller’s prolonged probe, Trump was dogged by unproven claims of Russian “collusion” (for 222 minutes), and the networks delighted in finding controversy in Trump’s tweets and taunts.

That’s why Washington Post reporter Dave Weigel joked on Twitter, “Why hasn’t the media been covering Biden’s constant Twitter fights with members of his own party?” That’s certainly true. Biden’s tweets are bland. One read, “Everyone 16 and older in America is eligible for the shot today. Go and get ’em, folks.” But it’s also true that Democratic reporters bury intraparty controversy when Democrats rule.

4. When Biden said scandalous things, the networks were bored. Biden’s insult about Republicans exhibiting “Neanderthal thinking” drew 83 seconds. His encouragement of Major League Baseball to punish Georgia for its new voting law by relocating the All-Star Game merited only 45 seconds. And his scabrous claim that the Georgia law is like Jim Crow passed by with just 39 seconds of coverage, none of it the slightest bit critical.

Like every Democratic president of the TV age, Joe Biden has been and will be celebrated, promoted … and coddled. The scrutiny fizzles. The watchdog naps.