‘A Pure Political Ploy’: Sen. Rubio Accuses Democrats of Trying to Pack Courts for Their Own Agenda 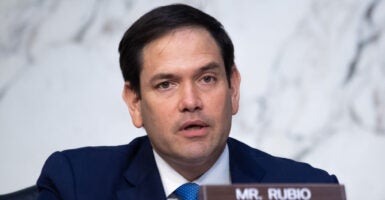 “It’s interesting, there was no problem with the courts up until a Republican president was elected and started appointing people to vacancies, now there’s a problem with the courts,” Sen. Marco Rubio, R-Fla., says. Pictured: Rubio speaks at a Senate Select Committee on Intelligence hearing on Capitol Hill April 14, 2021, in Washington, D.C. (Photo: Saul Loeb-Pool/Getty Images)

Rubio told Fox News Thursday that the bill is a “political ploy” that serves the Democratic Party’s political agenda. He added that issues with the court sprang up once the conservatives made up a majority of the justices.

“Now that there are conservative justices and judges that will interpret the Constitution the way it was written on the bench, now we have a crisis in the courts and that needs to be looked at. This is a pure political ploy, that’s all it is. It’s hardball politics,” Rubio said.

The senator said Democrats have used the courts to make policies that did not pass the legislative branch.

Rubio said Democrats never had an issue with the courts until former President Donald Trump began appointing justices to the court.

Rubio criticized media coverage of the bill, saying reports did not cover the proposal accurately.

“It’s sad that it isn’t being covered that way by most outlets, but that’s what it is,” he said.

President Joe Biden formed a commission to study the idea of court-packing, The New York Times reported. House Speaker Nancy Pelosi, D-Calif., said Thursday she will not bring recently proposed legislation on court-packing to the House floor, but said she is open to considering the idea.

“I think it’s an idea that should be considered and I think the president’s taking the right approach to have a commission to study such a thing,” Pelosi said. “I have no plans to bring it to the floor.”

The bill was introduced by Sen. Ed Markey, D-Mass., and Rep. Jerry Nadler, D-N.Y., and is co-sponsored by Reps. Hank Johnson, D-Ga., and Mondaire Jones, D-N.Y., The Intercept reported.

Nicole Silverio is a contributor to The Daily Caller News Foundation.