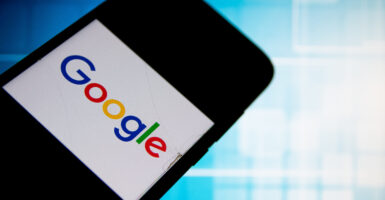 Google's logo is displayed on a smartphone screen. Google signed onto a collective statement with other corporations in the wake of the passage of a Georgia election integrity law. (Photo Illustration: Nikolas Kokovlis/NurPhoto/Getty Images)

The top executives of some of the largest corporations on the planet released a statement on Wednesday saying they support “democracy.”

If that sounds bland and terribly nonspecific, you get the gist of the statement, which was the product of a summit of more than 100 CEOs and executives. The summit was convened in response to passage of Georgia’s election integrity law and similar legislation being considered in other states.

The collective corporate statement was released in the form of an ad, which appeared in The New York Times, The Washington Post, The Wall Street Journal, and elsewhere.

Here’s what it said:

A government of the people, by the people. A beautifully American ideal, but a reality denied to many for much of this nation’s history. As Americans, we know that in our democracy we should not expect to agree on everything. However, regardless of our political affiliations, we believe the very foundation of our political process rests upon the ability of each of us to cast our ballots for the candidates of our choice.

For American democracy to work, we must ensure the right to vote for all of us. We should all feel a responsibility to defend the right to vote and to oppose any discriminatory legislation or measures that restrict or prevent any eligible voter from having an equal and fair opportunity to cast a ballot.

Voting is the lifeblood of democracy, and we call upon all Americans to join us in taking a nonpartisan stand for this most basic and fundamental right of all Americans.

This is so generic it makes one wonder what the point of the ad was. The Georgia election integrity law isn’t mentioned at all, nor are any other specific laws.

A list of more than 100 corporate signatories that appeared in the ad can be found at the bottom of this article. It includes Apple, the Ford Motor Co., PayPal, Google, Facebook, Amazon, Netflix, Under Armor, Sweetgreen, and American Express, among many others.

So, unless you don’t use the internet, drive a car, use large banking institutions, wear clothes, eat food you didn’t grow yourself, or pretty much function at all in modern life, you are almost certain to find companies you interact with on the list.

And, of course, The New York Times did its best to shame the companies that didn’t sign the statement.

Coca-Cola and Delta Air Lines, two of the companies that were most public and vocal about the Georgia voting law, were not on the list of the statement’s signatories.

What’s to be made of their collective statement?

One wonders, if the only truly animating “nonpartisan” issue these corporate titans are standing for is democracy, why do we see no similar collective statements in response to the autocratic and deeply anti-democratic policies of communist China, for instance?

“There is overwhelming support in corporate America for this principle of voting rights,” Kenneth Chenault, the former chief executive of American Express Co., said in the days before the meeting. “The right to vote is fundamental to America. It is not a partisan issue.”

Isn’t the right to vote fundamental in other countries, too?

Again, why was there no dramatic corporate summit to address the end of democracy when China was squeezing the life out of the last vestiges of free government in Hong Kong?

This is corporate posturing, little more than virtue signaling that they are all aboard the cause of the woke, social justice left.

It isn’t about “democracy” at all. It’s a typical corporate-speak way of demonstrating that they are committed to the cultural left and the policy priorities of the Democratic Party.

Though the product of this confab ended up being little more than insipid, nonspecific mush, the implications of this turn in corporate behavior should worry Americans.

Are these companies now going to constantly collaborate to bully and threaten states and elected officials who don’t pursue the policy agenda of the activist left?

Not only that, in spite of this corporate insistence on “democracy,” threatening states that pass laws through their democratically elected officials seems quite anti-democratic.

Such a turn further erodes public trust in private corporate institutions and makes them very much the opposite of “nonpartisan.” That only adds fuel to the fire of our current civic discord.

These trends are disturbing, but at least they are revealing. The rise of woke corporatism can no longer be ignored.