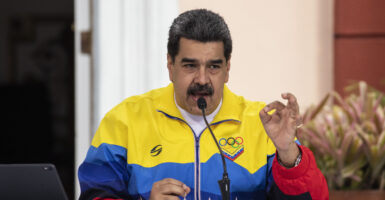 Venezuela once had a vibrant middle class, despite flaws in governance.

However, as two students who grew up in Venezuela explained in a Heritage Foundation webinar, embracing the socialist regimes of Hugo Chavez and Nicolas Maduro eventually led to utter ruin for all but that country’s elite.

Not only was Venezuela impoverished as a whole, but the middle class saw a severe decline in prosperity. Many became so impoverished they were unable to put food on the table.

The two students spoke last Wednesday about their experience growing up in Venezuela and offered a warning about what embracing real socialism actually means.

Andrés Guilarte, a university student and outreach fellow at The Fund for American Studies, said his country was once prosperous. He grew up in a stable home without want.

Things began to change in a bad way, Guilarte said, when Chavez was elected president in 1999; the decline became swift starting in 2013, so much so that “we didn’t even know if we’d have three meals a day.”

It got so bad, he explained, that even middle-class families often were reduced to eating garbage.

“When I was a child, I used to have great birthday parties. I used to have the latest versions of my favorite video games. My life was really, really great for me and my whole family,” Rodriguez said, adding:

But then since at least the year 2013, 2014, that situation changed almost completely to the point that where in my house, for example, we didn’t even have constant water supply. Electricity was constantly failing, food was really hard to come by.

Rodriguez said he saw his life “transformed” into something dramatically worse. He recounted a story about how his family attempted to help a homeless man, who told the family that he was more worried about them.

The homeless man said that although he knew how to live off the street, the Rodriguez family didn’t, but very soon would have to.

Rodriguez recalled that the man said to them: “I know that you people that are from the middle class are going to be in the same situation as me at some point in the future, and you’re not going to be able to eat from the trash can.”

Despite its failures, many Venezuelans still embrace socialism, Guilarte said, because they are taught to believe from the time they are children that it is wonderful.

Guilarte said that he used to call himself a socialist in part because of the indoctrination that occurs in Venezuelan schools.

“They tell you that Chavez was the biggest guy in the world, that he led the revolution, he was like Jesus on earth,” Guilarte said.

This indoctrination works, he said, and some members of his family thought that the Chavez regime was going to be better than the previous governments, which often were corrupt and made many mistakes.

However, Guilarte said, his eyes were opened when some college friends began to protest the government and he realized he was “on the wrong side.”

“I still wanted to help people, but the only way to do that is to not only defend liberty but to fight for liberty,” Guilarte said.

Shaking people out of believing in socialism sometimes requires them to hit “rock bottom,” he said.

Lee Edwards, distinguished fellow in conservative thought at The Heritage Foundation, said some misconceptions about socialism often are used by proponents to make excuses for its failing. One such misconception, he said, is that “socialism has never failed because it’s never been tried.”

This isn’t true, Edwards said, because socialism has been tried in many places and failed. He pointed to three countries in particular—Israel, India, and the United Kingdom—that attempted to implement socialist policies after World War II.

Israel experienced catastrophic inflation, half of India’s population was stuck in poverty, and the U.K. became the “sick man of Europe,” the Heritage scholar said.

Edwards, Rodriguez, and Guilarte made a distinction between socialism as seen in Venezuela and the economies of Nordic countries—such as Denmark—that are strongly pro-market. Guilarte said: