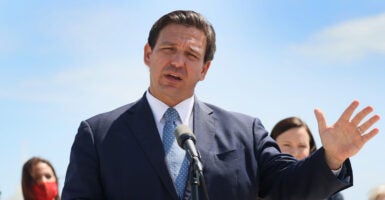 Many in the media and individuals in the "60 Minutes" story on Florida Gov. Ron DeSantis cried foul on the video being deceptively edited. Pictured: DeSantis speaks to the media about the cruise industry during an April 8 press conference at PortMiami in Miami, Florida. (Photo: Joe Raedle/Getty Images)

The report alleged that because of a campaign donation Publix made to DeSantis, the Republican governor favored it in the rollout of the vaccine in the state. The program further stated that in doing this, minorities were adversely affected since Publix stores are not as prevalent in their neighborhoods.

The segment included a video of a confrontation between DeSantis and the “60 Minutes” correspondent in which the governor stated that what the correspondent said about Publix was a “fake narrative.”

“60 Minutes” decried this as foul play and a deflection.

After the segment aired, video of the full exchange emerged. What it showed was DeSantis explaining the negotiations that occurred between his office and Democrat-led Palm Beach County over where to distribute vaccines. It was determined that more than 90% of the elderly citizens in the county lived within minutes of a Publix.

As highlighted by Yahoo News and many other news outlets, the “60 Minutes” story was false. It was deceptively edited to make it appear that DeSantis said one thing without showing his complete statement.

After the segment aired and the facts emerged, the Democratic mayor and Democratic health officials in Palm Beach County came out and denounced the “60 Minutes” report as devoid of facts and completely untrue. They stated that in no way was there any foul play in determining to use the Publix supermarkets as vaccine distribution centers and that it was the county’s idea to use Publix, not the governor’s.

Publix likewise stated that it was an attempted attack on its brand for no reason. When “60 Minutes” was asked to respond, CBS News deflected, and the spokesperson provided no useful comment.

Dave Kerner, the mayor of Palm Beach County, who happens to be a Democrat, defended DeSantis, stating: “The reporting was not just based on bad information—it was intentionally false. I know this because I offered to provide insight into Palm Beach County’s vaccination efforts and ‘60 Minutes’ declined.”

This is just the latest example of why a bipartisan majority of the American public does not trust mainstream media. When so-called reputable news segments and organizations deliberately lie and misinform the public for no apparent reason, other than what must be partisan attacks, it only serves to further divide and sow distrust in the media.

In a Jan. 21 article by Felix Salmon published by Axios, he writes that “trust in traditional media has declined to an all-time low.” In fact, according to Axios, “56% of Americans agree with the statement that ‘Journalists and reporters are purposely trying to mislead people by saying things they know are false or gross exaggerations” and “58% think that ‘most news organizations are more concerned with supporting an ideology or political position than with informing the public.”

The scandal surrounding “60 Minutes” highlights exactly why so many Americans are becoming more distrustful of the news media; and with CBS refusing to correct the story, it could be another reason—along with many yet to come—that could further cement that distrust.

“60 Minutes” would have been better served by playing the entire clip and laying out the facts, rather than airing a segment to its millions of viewers on allegations that have no basis in fact.

CBS stated that the clip had been edited “as we always do for clarity”; however, the end result wasn’t clarity, but a blatant attempt to lie and misrepresent what DeSantis said. If other journalists, including those at CBS, don’t call out this type of behavior for what it is, why should anyone trust CBS or any other media outlet?

We have to demand that our journalists are honest and transparent, and purposely deceiving the public only causes more distrust and divisions in a country that’s already deeply divided. “60 Minutes” must do everything it can to correct the story: acknowledging that a mistake was made, correcting it by re-editing the show to include DeSantis’ entire statement, and finally, taking steps to assure this can never happen again.

If it cannot or will not take basic steps, it will, indeed, lose credibility with many Americans. That would truly be unfortunate for one of America’s formerly great news shows.