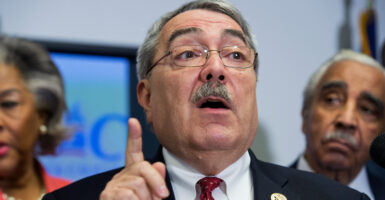 In what’s becoming a Capitol Hill ritual, lawmakers recently called the leaders of Facebook, Google, and Twitter back before Congress to give them their latest pummeling.

This particular session focused on “misinformation” and how social media companies purportedly played a role in the Jan. 6 attack on the U.S. Capitol, but it easily could have been mistaken for any number of previous hearings, where lawmakers berated and demanded action from the tech giants.

For some lawmakers, concerns about the spread of “misinformation” led to suggestions that social media platforms disregard free speech and increase the content they censor.

In recent months, tech companies have already ramped up censorship in the name of a nebulous “social good.”

From Twitter’s pre-election decision to bury the New York Post article on Hunter Biden, to postelection bans of then-President Donald Trump, to the deplatforming of Parler, tech companies are flexing their muscle as an unelected arbiter of what Americans can—and cannot—see.

The Media Research Center has compiled an ever-growing list of some of the most egregious forms of censorship carried out by Big Tech.

While the immense power wielded by these companies is a cause of concern for many conservatives, it’s the unrelenting calls by some in Washington for more censorship that should chill the blood of anyone remotely interested in protecting free speech.

“Your companies need to be held accountable. … Ours is the committee of jurisdiction, and we will legislate to stop this. The stakes are simply too high,” warned Rep. Mike Doyle, D-Pa., chairman of the House Energy and Commerce subcommittee on communications and technology, at the March 25 hearing.

“It is now painfully clear that neither the market nor public pressure will force these social media companies to take the aggressive action they need to take to eliminate this information and extremism from their platforms,” he said. “Therefore, it’s time for Congress … to legislate and realign these companies’ incentives.”

Those promises of government intervention were followed up by a series of increasingly brazen demands.

Doyle, for example, demanded the tech giants take down pages and accounts skeptical of the COVID-19 vaccine. He was joined by Rep. Jan Schakowsky, D-Ill., who chided the social media executives for allowing a Spanish-language ad comparing then-presidential candidate Joe Biden to socialist Latin American dictators during the 2020 election campaign.

In perhaps the most disturbing statement by a committee member, Rep. G.K. Butterfield, D-N.C., warned that if the tech industry didn’t become more “diverse” by government standards, then “Congress [would] have to compel [them] with penalties to make meaningful changes.”

Whether or not you think that vaccines are useful, that Biden is a socialist, or that the government should supervise hiring practices is beside the point. It’s not illegal to question vaccines, nor is it illegal to criticize your political opposition.

Yet if some congressional Democrats were to have their way, tech giants would be forced to remove such content or face government-enforced consequences.

Americans should be concerned about the symbiosis of Big Tech and big government that is rapidly approaching. The state, unable to legally curtail the free exchange of ideas it finds loathsome, can now offload the task onto private enterprise.

Leftist activists in power at these tech companies are more than happy to remove content that they, too, find so upsetting.

“Today’s digital platforms provide avenues for historically unprecedented amounts of speech, including speech by government actors. Also unprecedented, however, is the concentrated control of so much speech in the hands of a few private parties,” Thomas wrote in an opinion for a case involving Twitter.

And at the congressional hearing, Rep. Dan Crenshaw, R-Texas, said it best: “There’s a growing number of people in this country that don’t believe in the liberal values of free speech and free debate. I promise you, the death of the First Amendment will come when the culture no longer believes in it.”

Crenshaw’s words should serve as a warning to those of us who recognize the essential nature of free speech to a healthy republic. Authoritarians have recognized the power and reach of social media and Big Tech, and will use the language of “social good” to try and curtail ideas they don’t like.

And when free speech goes, so too goes the republic.