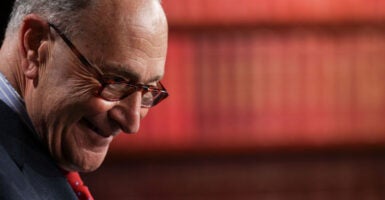 The Senate’s parliamentarian has ruled that Democrats can use budget reconciliation for a second time in the same fiscal year, a spokesman for Senate Majority Leader Chuck Schumer said.

Senate Democrats’ ability to use the legislative tool means that, hypothetically, they could pass President Joe Biden’s disputed infrastructure bill with a simple majority vote instead of the 60 votes required to override a filibuster.

If reconciliation proceeds, then Democrats would have enough votes to pass Biden’s infrastructure and tax packages with Vice President Kamala Harris’s tie-breaking vote if every senator in the party votes in favor.

Schumer, D-N.Y., also could pass a third budget resolution in fiscal year 2022, when Democrats still will have full control of Washington. His office previously lobbied MacDonough that the majority could revise the 2021 resolution under Section 304 of the Congressional Budget Act of 1974.

“This [ruling] confirms the Leader’s interpretation of the Budget Act and allows Democrats additional tools to improve the lives of Americans if Republican obstruction continues,” the written statement by Schumer’s spokesman said.

Biden’s $2.25 trillion infrastructure plan would be funded largely by tax increases on wealthy Americans and corporations, which Republicans have labeled as a non-starter.

Some Democrats also objected to the bill as written, including Sen. Joe Manchin, D-W.Va., who came out against the bill Monday.

“As the bill exists today, it needs to be changed,” Manchin said. “It’s more than just me. There’s six or seven other Democrats who feel very strongly about this. We have to be competitive, and we’re not going to throw caution to the wind.”