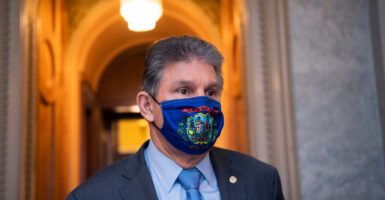 The media incessantly cover the Senate filibuster issue as a way to pressure holdout Democrats to join the left in efforts to destroy the Senate. Pictured: Sen. Joe Manchin during a Senate vote March 25 in the Capitol. (Photo: Tom Williams/CQ-Roll Call, Inc via Getty Images)

As we speak, there is no bill on the congressional docket that would provide Democrats an excuse to blow up the filibuster—or, as the media might euphemistically refer to it, “reforming” or “overhauling” the filibuster.

Yet, a casual follower of politics would surely be under the impression that there is a pressing battle unfolding because the media are incessantly covering the filibuster issue as a way to pressure holdout moderate Democrats to join the left in the efforts to destroy the Senate.

In July 2020, before Democrats had even won their slim Senate majority, Raju was already haranguing Manchin and framing the filibuster—a “stall tactic”—in left-wing terms. To which Manchin emphatically responded, “That’s b———t.” And then noted he had opposed a Democratic Party effort to kill the filibuster in 2013 and would do it again.

Boy, that seems pretty clear to me.

Not to The New York Times, though, which asked Manchin in January about the filibuster, to which he answered: “I can assure you I will not vote to end the filibuster, because that would break the Senate.”

On March 1, after months of being asked the same question in nearly every interview, Manchin lashed out at reporters with a profanity and asking, “What don’t you understand about ‘never’?” Apparently, that wasn’t clear enough, either.

A few days later, NBC’s Chuck Todd asked him again. To which Manchin said: “I’m not going to change my mind on the filibuster.”

And a few days after that, when Manchin was asked by Politico: “I want to make it very clear to everybody: There’s no way that I would vote to prevent the minority from having input into the process in the Senate. That means protecting the filibuster. It must be a process to get to that 60-vote threshold.”

This week, Raju tweeted: “Just asked Kyrsten Sinema—who refuses to answer questions—whether she’d be open at all to reducing the 60-vote threshold on the filibuster. ‘I love your enthusiasm,’ she said as the elevator doors closed.”

Sinema hasn’t refused to answer questions. Her office stated that she is “against eliminating the filibuster, and she is not open to changing her mind.”

What Raju means is that Sinema refuses to answer the same question for the 90th time.

The media could be asking more meaningful questions, instead of doing raw advocacy for the progressive wing. Why isn’t Raju demanding that Sens. Brian Schatz, Tim Kaine, Ed Markey, Michael Bennet, Amy Klobuchar—or any of the numerous other Democrats who signed Sen. Susan Collins’ 2018 letter promising to preserve the 60-vote threshold for legislation—explain why they were fine using this supposedly racist relic of Jim Crow hundreds of times in the past few years? Why? Why? Why?

Why, senators, are you pretending that you are facing unprecedented gridlock only two weeks after passing one of the largest pieces of legislation in history? Why? Why? Why?

Hey, Markey, you say that the “filibuster was created so that slave owners could hold power over our government.” Yet, in 2018, you said it was a tool that “recognizes the rights of the minority and makes bipartisan legislation.”

Why doesn’t Raju, Todd, or any other high-profile political reporter badger Manchin or Sinema about turning on the Hyde Amendment—which has suddenly been abandoned after 50 years? Manchin; Why, after decades, do you believe taxpayers should be forced to fund late-term abortions? Will you change your mind? Huh? Huh? Huh?

Why? Because the entire focus of political media coverage is dictated, framed, and articulated in whatever way Democrats deem important right now for partisan gain. At this point it is beyond bias. It’s corrupt.

Of the 10 reporters that President Joe Biden called on during his first press conference, three asked about the filibuster—though not a single one had any time for a question about COVID-19 or other pressing issues.

After four self-aggrandizing years of pretending to hold the powerful accountable, we are once again reminded that the political press largely exists to obsess over the Democrats’ agenda items.