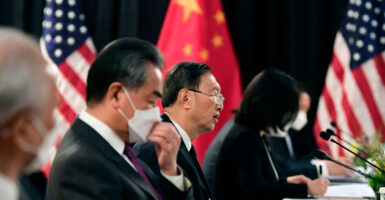 Don’t be surprised when China’s leaders talk down to top Biden administration officials, whether at a meeting last month in Alaska or elsewhere, going out of their way to cast the United States as a racist den of inequity.

That is, after all, how our elites and educators describe the country to our students constantly.

What we’re seeing now, generally, is a convergence of interests and rhetoric between the American far left and a Chinese Communist Party that has been fully in control of the People’s Republic of China since 1949.

So, when Yang Jiechi, the Chinese Communist Party’s  foreign affairs chief and longtime American hand, lectures U.S. Secretary of State Antony Blinken and national security adviser Jake Sullivan in Anchorage, Alaska, that the U.S. must “change its own image” and that “many people within the United States actually have little confidence in the democracy of the United States,” he’s just repeating what is routinely said on MSNBC or on any U.S. college campus.

Similarly, when Foreign Ministry spokesman Zhao Lijian tells a press conference in Beijing that attacks against Chinese Americans are the result of rhetoric from the Trump administration and of criticism of China’s woeful human rights record, he’s just repeating what Rep. Jerry Nadler, D-N.Y., and even people in the Biden administration have said.

The same holds for when China’s top leaders hold up Black Lives Matter to say, as Yang did, that “the challenges facing the United States in human rights are deep-seated. They did not just emerge over the past four years, such as Black Lives Matter. It did not come up only recently.”

What are Blinken and Sullivan supposed to do, act like former top U.S. officials and tell Yang that, no, the United States is actually the freest and most prosperous society on earth, one that is much, much less racist than China?

They can’t. If they spoke the truth, they would be impaled by their own party.

The American left is increasingly under the influence of its extreme elements, which means that, like China’s leaders, it wants the United States to undergo deep-seated transformation.

That has a number of implications.

Both sides like that Black Lives Matter organizations and their leaders are destabilizing America from within: China, because it wants a weaker American rival, and the hard left because it wants to destroy America’s institutions and economic system so it can replace them with socialist ones.

Both sides, for different reasons, want the United States to stop criticizing China for its woeful human rights record, and not just in Xinjiang, where it puts the mostly Muslim Uighurs in concentration camps to Sinicize them; in Hong Kong, where Beijing has ended promised autonomy; in Tibet, which China has occupied for 60 years; or in Taiwan, a free, capitalist island that Beijing lusts after.

Speaking at a subcommittee hearing on an increase in crime against Americans of Asian descent, Nadler said:

It is important to recognize that this surge did not spontaneously arise only out of fears regarding the coronavirus pandemic. Some of this blame lies squarely on political leaders who have demonized China—both because of the virus and ongoing geopolitical tensions—and in turn Asian Americans have fallen in harm’s way.

Both sides agree that the United States, as a society and a nation, does not have the moral standing to criticize China.

The New York Times’ Peter Beinart recently wrote that to criticize China, the U.S. must also engage in self-flagellation.

“If American politicians talk only about China’s power and belligerence without also reminding Americans that Beijing’s military budget is a fraction of America’s, that China has good relations with major democracies, and that China has waged far fewer wars in recent decades than has the United States, they will be contributing to the kind of hysterical fear that over the last century has victimized vulnerable Americans again and again,” Beinart wrote.

Both Nadler and Beinart pointed to COVID-19, which first emerged in the Chinese city of Wuhan, as another area where Americans should not criticize China.

They both share an interest in blaming former President Donald Trump—and not the lies of the Chinese Communist Party—for the spread of the virus. Like China’s leaders, the American left has let Trump, a real estate magnate, live rent-free inside its brain.

Both sides will also use the current rise in crimes against Americans of Asian descent for their own expedient political purposes: China, to make the case to the world, but especially to its own people, that the U.S. model is inferior to its own, and the left, because the success of Asian Americans is a rebuke against its ideology.

These Americans, especially Chinese Americans, work and study hard, and enjoy the rewards. They pursue the success sequence, abide by the law, learn the civic environment of their new country, and successfully organize to stop racist practices.

That’s why the woke left must jump on the opportunity to instill grievances and try to make sure that they see themselves as victims.

That’s why they have so much in common.