Is Beijing Funding Riots in America? It’s Time to Investigate 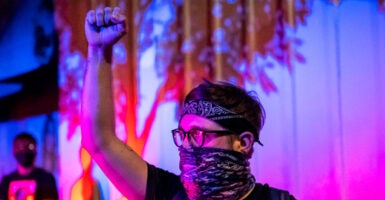 The Chinese Communist Party has an interest in sowing discord in the U.S., particularly during an election year. Pictured: A demonstrator exults Sept. 6 in Portland, Oregon, during the 101st consecutive night of unrest there. (Photo: Nathan Howard/Getty Images)

Who is funding the clearly organized riots happening throughout the U.S.? It’s a question often asked these days, without many answers.

Black Lives Matter has been a consistent participant in each of the riots this summer. In fact, up to 95% of this summer’s riots are linked to Black Lives Matter activism, according to data collected by the Armed Conflict Location and Event Data Project, a nonprofit organization that tracks conflict across the globe.

Corporations, professional sports leagues, and Hollywood all have shown support for the main Black Lives Matter organization. And now, we know that a pro-China organization, the Chinese Progressive Association, funds a BLM sister organization.

Black Futures Lab, a venture of Black Lives Matter founder Alicia Garza, has on its website a “Donate” button that, when clicked, explains that “Black Futures Lab is a fiscally sponsored project of the Chinese Progressive Association.”

As one of us (Mike Gonzalez) wrote in this piece for The Daily Signal, the Chinese Progressive Association is a partner of China in the U.S. This potential link between the communist regime in Beijing and the riots destroying American lives and livelihoods deserves investigation from the executive branch and Congress.

There is a reason Americans don’t have satisfactory answers when we ask who is funding these organized riots. The groups, their organizers, and their funders don’t want us to know. They create multiple organizations and can move money among them.

It is why Heritage Foundation policy experts have called for the Justice Department to investigate and, if appropriate, prosecute these organizations under the Racketeer Influenced and Corrupt Organization Act, popularly known as RICO.

>>> Related: This BLM Co-Founder and Pro-Communist China Group Are Partnering Up. Here’s Why.

To get to the bottom of who is funding the riots, the federal government needs to connect the dots. Four of those dots are: the Black Lives Matter Global Network Foundation, Garza, the Black Futures Lab, and the Chinese Progressive Association.

A page at the Black Futures Lab website states that its founder, Garza, “helped create Black Lives Matter in 2013” and adds:

We are a proud supporter of the Black Lives Matter Global Network, a chapter-based, member-led organization whose mission is to build local power and to intervene in violence inflicted on Black communities by the state and a proud supporter of the powerful Movement for Black Lives, a coalition of more than 50 organizations representing thousands of Black people from across the country that have come together to articulate a common vision and agenda.

The Chinese Progressive Association, which sponsors Black Futures Lab, began in San Francisco as a leftist, pro-China organization. The association continues to partner with China and has been praised by the Chinese Communist Party’s media outlet, China Daily, including for participating in BLM protests.

In 2010, the Chinese Progressive Association sponsored a ceremony to hoist the communist China flag at Boston’s City Hall Plaza in honor of the communist takeover of China some 60 years earlier.

The Chinese government has explicitly entered the propaganda battle in support of Black Lives Matter. For example, the Chinese Foreign Ministry’s spokesman, Zhao Lijian, said this summer that racial discrimination is a long-lasting problem in the United States.

Criticizing America for systemic racism is not just hypocritical but a convenient distraction from the Chinese Communist Party’s human rights violations against Uighurs and other Turkic Muslim minorities in China’s Xinjiang province.

Americans have a right to know who is behind the continued violence in our cities. As a sovereign nation, we should know whether a foreign government is fueling this internal damage to our country.

The U.S. government should connect the dots and investigate the extent of the Chinese Communist Party’s support for the Black Lives Matter organization and the riots. It’s past time for answers.