Washington Should Steer Clear of Tax on Vehicle Miles Traveled 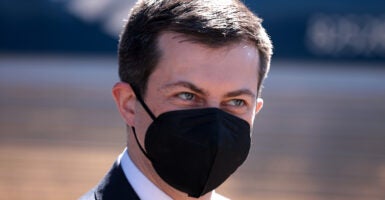 One of the most frequent claims from Joe Biden’s 2020 presidential campaign was that he would only seek tax increases on those earning more than $400,000 per year.

That was always a dubious promise, given his expensive big-government agenda, and now we’re seeing examples of how a tax-and-spend approach can hit everyday Americans.

Setting aside that the $400,000 goal post has been moved from individuals to households, which ropes in millions of additional families, a high-profile Cabinet member has touted a new tax that would necessarily hit anyone who drives a car (which is the vast majority of adults).

Last Friday, Transportation Secretary Pete Buttigieg praised the concept of imposing a nationwide vehicle miles traveled tax in an interview. He said that there likely would be several different tax increases as part of expected infrastructure legislation, which he claims is necessary because “it’s got to be transformative.”

After Buttigieg’s comment went viral, a Transportation Department spokesman and Buttigieg himself stated that a mileage tax was not part of the upcoming infrastructure plan. Nonetheless, key members of Congress have been working to fund mileage tax pilot programs, which is the first step toward making the tax a reality.

The concept of a mileage tax has been around for years. One of the main reasons why the idea has become more prominent is the increasing use of hybrid and electric vehicles, which pay little or nothing in gas taxes. As such, federal gas tax revenue has flattened.

There are two ways of implementing the potential new tax.

One would involve annual odometer readings. That would be vulnerable to rollback devices that can change a car’s mileage readout, and it would be a logistical nightmare to perform on all cars across the country every year.

The other method would use GPS trackers to monitor the distance a car travels. That also has implementation concerns, such as whether older cars would have to have the devices retrofitted in and whether manufacturers would be forced to add them to new cars.

In addition, there are serious privacy concerns regarding whether a vehicle’s GPS data could be used to monitor individual drivers. Any such system would need to have strict rules in place to safeguard civil liberties.

That’s only the beginning of problems with imposing a nationwide mileage tax.

Supporters of the tax regularly claim that it would replace the gas tax. There are good reasons to be skeptical of that promise.

The astonishing size of current spending plans would require as much tax revenue as the federal government can get, meaning that any sort of tax cut is unlikely. Simply not paying for infrastructure spending by adding to the federal debt would be unwise, given the nation’s crumbling finances and growing deficits in the highway fund.

Thus, a mileage tax would almost certainly be layered on top of the gas tax, meaning a tax increase for the vast majority of families. However, even if the gas tax were to be eventually phased out, supporters of a mileage tax are clear that the main goal of the tax is to bring in more revenue than the gas tax currently provides.

Either way, that spells a tax increase, and one that will disproportionately hit blue-collar workers who can’t telecommute.

Another reason to oppose the mileage tax is that it’s based on the idea that we need the federal government to meddle with infrastructure development more than it already does.

The opposite is true.

Federal involvement means that projects take longer to complete, cost more, and are less accountable and transparent than ones funded by the private sector or state and local governments.

If a mileage tax becomes the law of the land, it would cement the federal government’s obsolete and counterproductive role in how we manage our transportation systems. It would also funnel more money to non-highway uses, such as bike paths or bloated compensation for transit workers.

While local officials tend to support federal infrastructure spending because they too often see it as “free money,” this does not change the fact that more federal dollars will make state and local governments more dependent on Washington.

An increasing centralization of political power and control in a single place goes against the founding principles that made America great, and it’s even less desirable as the nation becomes larger and more diverse.

Cheerleaders for an ever-larger federal government should have to explain why it’s a good idea to make the nation more reliant on an increasingly dysfunctional Congress.

A vehicle miles traveled tax would also be vulnerable to bureaucratic micromanagement, especially if it’s done with a GPS system. The federal government could charge different rates per mile, based on location, time of day, or traffic volume, and thus politicize the way we drive by playing favorites.

Those who promote the new tax-and-spend mega-package will insist that the only choices are voting for their progressive grab bag or allowing our roads and bridges to fall apart. That’s a false choice.

Rather than allowing the federal government to take over the funding of roads, bridges, trains, school construction, and water lines, we should reduce federal power and control.

Getting rid of wasteful programs and red tape would mean we get more mileage per dollar spent, and devolving control from Washington would bring decision-making closer to home.

That would be better for America’s roads and democracy alike than placing a new tax burden on hardworking families.