How Trump Can Get a Better Deal on Infrastructure 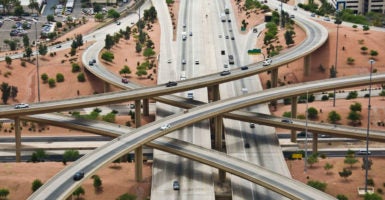 This April, a meeting between Trump and Democratic leaders produced a $2 trillion figure for an undefined infrastructure package. Pictured: The Pima Freeway and Black Canyon Freeway in Phoenix, Arizona. (Photo: Morey Milbradt/Getty Images)

Federal lawmakers have been talking about their desire for bipartisan legislation on infrastructure since before President Donald Trump’s inauguration.

This April, a meeting between Trump and Democratic leaders produced a $2 trillion figure for an undefined infrastructure package.

That price tag alone guarantees more involvement and control from Washington, which has not demonstrated an abundance of competence over the years.

The president would do better to avoid engaging in an unwinnable bidding war with big-spending Democrats and instead focus on deregulation, which would boost infrastructure investment from the private sector along with state and local governments.

A Heritage Foundation analysis shows how the president and Congress can work together to implement spending and regulatory reforms that would unlock more than $1 trillion in additional infrastructure value without adding another cent to deficits or raising taxes.

The private sector and state and local governments currently own and maintain most of the nation’s roads, airports, and utilities. The vast majority of infrastructure serves limited areas and specific populations.

In general, the people who benefit the most should be the ones who have ownership over infrastructure and who assume the costs.

Proposals from congressional Democrats have repeatedly sought to turn the funding and ownership structure upside down by imposing federal control over more of the nation’s infrastructure.

Supporters of the Green New Deal, for example, want to throw untold billions of dollars into rail projects that are incompatible with the nation’s geography and how most Americans live day to day.

The reality of the situation is this: America does not need $2 trillion in federally directed infrastructure spending, the country cannot afford ever-increasing budget deficits, and working families cannot stomach sharp tax increases.

Rather than find ways to spend even more taxpayer dollars at the federal level, U.S. leaders should focus on getting more value for those dollars.

While the best choice would be to return more responsibility and control over infrastructure from the federal government to the private sector and the states, there are several options available to get more bang for the buck on federal projects.

Congress has caused this, primarily by spending 28 cents of every dollar in the fund on urban transit, metro area planning, ferryboat terminals, bike paths, and other local programs instead of maintaining roads and bridges, to the detriment of the drivers who pay the gas tax.

City residents who use transit should be responsible for paying for it. Focusing gas tax revenue on roads would go a long way toward shoring up the federal Highway Trust Fund.

Second, Congress and the administration can act to eliminate rules that unnecessarily drive up the cost of infrastructure projects.

For example, when the federal government provides a grant to a state government, the Davis-Bacon Act dictates worker pay, inflating labor costs. Repealing Davis-Bacon would save billions of dollars every year.

Duplicative reviews and permits tie down the energy sector in particular, costing the economy tens of billions of dollars per year. This often harms investments in renewable energy alongside fossil fuels.

By streamlining the permitting process, environmental reviews could be addressed in more economical and efficient ways.

Rather than getting into an unwinnable contest with congressional Democrats over who wants to spend more, Trump should promote ways to improve the nation’s infrastructure by cutting red tape and reforming the Highway Trust Fund.

That would be a very good deal for America.