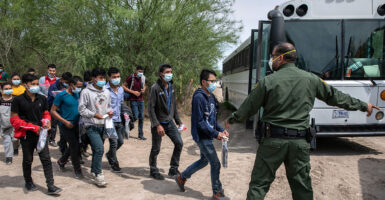 A sheriff whose Arizona county is 60 miles from the southern border says his county is experience a direct impact from the flood of illegal immigrants streaming into the U.S. from Mexico.

“We just this morning had a procedure where we chased a car,” Pinal County Sheriff Mark Lamb told The Daily Signal in an interview Wednesday.

“We had to release the canine on … the driver,” Lamb said. “And there was seven undocumented aliens in there. Three of them were children. This is something we’re dealing with every day, when my county, which is 60 miles off the border … . It’s 49 apprehensions in one day.”

Upon being sworn in Jan. 20, Biden signed an executive order halting construction of former President Donald Trump’s wall along the U.S.-Mexico border and ended Trump’s “Remain in Mexico” policy for would-be immigrants and asylum-seekers.

Lamb said there’s no way that his county would be able to take on responsibility for, and the cost of, shelter for all the incoming illegal immigrants.

“I can tell you we don’t have enough housing in our community for the people that are American citizens … now, you want to inject thousands and thousands more people in our community,” Lamb said. “You don’t have the infrastructure for that, not to mention all the other issues that go along with it.”

And now you’re telling people to come in here, and we’re not even going to give you a court date [for an asylum hearing]? This is going to be on the honor system for them … .

In an interview Wednesday on “The Daily Signal Podcast,” Mark Morgan, who served as acting commissioner of U.S. Customs and Border Protection in the Trump administration, said statistics show illegal crossings at the border have exploded since Biden took office.

“Last month, in the month of February, they saw over 100,000 apprehensions of people trying to illegally enter the border,” Morgan, currently a visiting fellow at The Heritage Foundation, said, adding:

Earlier this month, the Department of Homeland Security conceded that illegal crossings are going to reach the highest levels in two decades. In a statement, Homeland Security Secretary Alejandro Mayorkas said, “We are on pace to encounter more individuals on the southwest border than we have in the last 20 years.”

Lamb said he is also seeing an increase in the amount of fentanyl overdoses because “we’re allowing these drugs to come into our communities, methamphetamines, all of these drugs are more available now, not just in my county.”

The greater danger is that this probably expands far beyond Pinal County, said Lamb, whose county is the size of the entire state of Connecticut and whose department employs 650.

“We’re seeing it firsthand, the amount of overdoses that we’re getting, but also across this country. We are the tip of the spear. These drugs, these folks don’t always stay here,” he said, adding:

They go to the rest of the country. So, every city across this country will be affected by what’s happening here, not just on the border. This is an American problem. And we have a [federal] government that is not doing what they’re supposed to do.