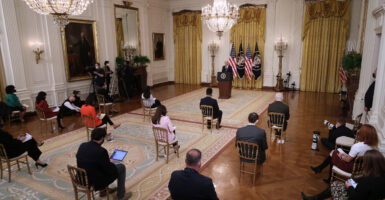 President Joe Biden holds the first news conference of his presidency in the East Room of the White House on March 25, 2021 in Washington, D.C. (Photo: Chip Somodevilla/Getty Images)

President Joe Biden’s first formal press conference is in the books, and it was deeply embarrassing to anyone who thinks the media’s job is to hold presidents accountable.

Taxpayer-enabled PBS White House correspondent Yamiche Alcindor was the worst. She complimented the president, saying: “You’ve said over and over again that immigrants shouldn’t come to this country right now; this isn’t the time to come. That message is not being received. Instead, the perception of you that got you elected as a moral, decent man is the reason why a lot of immigrants are coming to this country and are trusting you with unaccompanied minors.”

Mr. President, you’re a decency magnet! Biden replied: “Well, look, I guess I should be flattered people are coming because I’m the nice guy. That’s the reason why it’s happening.”

One overarching theme of the reporters Team Biden hand-picked was their lust for the destruction of the filibuster and their channeling power-hungry leftists such as Rep. Alexandria Ocasio-Cortez who want a “big agenda.”

Alcindor followed up by noting that Zeke Miller of the Associated Press began the event by vaguely asking how far Biden is willing to go to override Republicans (hint, hint). He mentioned immigration: “(I)mmigration is a big issue, of course, when it — related to the filibuster, but there’s also Republicans who are passing bill after bill trying to restrict voting rights, Chuck Schumer calling it an existential threat to democracy. Why not back a filibuster rule that at least gets around issues, including voting rights or immigration?”

Washington Post reporter Seung Min Kim echoed: “To follow up on the filibuster: So, do you believe it should take 60 votes to end a filibuster on legislation or 51?”

CBS News reporter Nancy Cordes repeated that Republicans want to “restrict” voting for young people and minorities and asked, “Is there anything else you can do about it besides passing legislation?”

Was it racist when Obama or Biden filibustered? No one asked.

How is it fair or factual to claim that Republican bills that would require voters to show voter ID at the polls or a signature verification for a mail-in ballot are relics of Jim Crow? CNN claims to be “Facts First”? This is a pants-on-fire lie.

The other dominant issue was immigration. ABC News’ Cecilia Vega channeled the story of a 9-year-old immigrant being sent to America by his mother. (There’s no criticism of the mother.) She lectured Biden by noting that unaccompanied minors are sleeping on floors.

Janet Rodriguez with Univision, which is both a TV network and an immigration advocacy group, demanded to know when all these shameless border crossers are going to get a smoother entry. “When can we expect your promise of things getting better with contacting and expediency and processing?” she asked.

To her credit, NBC’s Kristen Welker asked when Biden will allow the press inside the overcrowded facilities for unaccompanied minors, and she was denied a serious answer. There were serious questions about Afghanistan and China and North Korea.

But overall, there were no questions allowed from outside the liberal-media bubble. Peter Doocy of Fox News was snubbed. It all felt carefully scripted, as Biden seemed to be reading some answers from a notebook. Most reporters pushed the president to be more partisan, more radical, to defeat allegedly racist, democracy-destroying, “restrictive” Republicans. It felt much more like a cozy Democratic strategy session than a press conference.