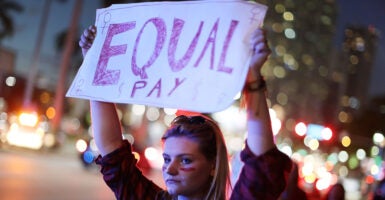 A young woman calls for equal pay for women at a March 8, 2017, demonstration in Miami. A 2020 Payscale.com analysis found that the gender pay gap declined from 19% to 2% after controlling for different choices men and women make. (Photo: Joe Raedle/Getty Images)

This year, March 24 marks “Equal Pay Day”—a day that’s supposed to symbolize how far into the new year women must work to earn what men did in the previous year.

In 2020, the median earnings of all full-time wage-earning and salaried female workers were 18% lower than males.

That would be a problem if women were being paid less to do the exact same jobs as men, or if women were not allowed to pursue the same higher-paying jobs and careers as men.

But what’s at play is not differences in earnings so much as a difference in choices that men and women tend to make regarding their careers, their jobs, and—in particular—parenthood.

Women historically have earned less than men because they had lower education and because cultural discrimination was more prevalent. Now, women achieve as much, and often more, education compared with men; they’ve proven themselves equally capable as men in the workplace; and they’ve got the law and the competitive free market on their side.

And yet, a persistent gap remains between the average wages of women and men.

Logical factors, such as occupation, experience, and time out of the workforce explain almost the entirety of gender-based pay differences. A 2020 Payscale.com analysis found that the pay gap declined from 19% to 2% after controlling for different choices men and women make.

An analysis by Harvard researchers of a unionized environment with rigid pay scales that prohibited discrimination similarly found that “the weekly earnings gap can be explained by the workplace choices that women and men make,” with women choosing to take more unpaid leave and to work fewer overtime hours than men.

Choice of occupation also plays a role. A 2014 study of federal employees’ wages found that the average woman earned 11% less than the average man. Within pay grades, earnings were equal, but the difference was the result of more women working in lower-paying occupations.

Most notably, those choices often have to do with parenthood. Recent research indicates that most—perhaps all—of the so-called gender pay gap is caused by the different impact that children have on women and men.

Very generally speaking, men respond to fatherhood by pursuing promotions and higher pay—presumably out of a desire to provide financially for their families—while women tend to seek less demanding work outside the home so that they can spend more time with children.

Paychecks aren’t the measure of people’s worth. Rather, people value the freedom to pursue the careers, families, and hobbies they desire.

Moreover, there’s tremendous personal and societal value to the things people do while not working for wages—such as caring for and raising children and volunteering.

Since equality of opportunity—not outcomes—is the American ideal, women’s (and men’s) abilities to pursue the career and family paths that work best for them should be the focus.

Experience with policymakers’ attempts to equalize outcomes—both within the U.S. and abroad—have often resulted in unintended consequences on women, men, and children.

In the U.S., the 1993 Family and Medical Leave Act—guaranteeing unpaid, job-protected leave—had the unintended consequence of reducing women’s chances of being promoted by 8 percentage points. And state-based paid family leave programs in New Jersey and California reduced young women’s employment and earnings.

Similarly, heavily subsidized child care programs have failed to help women. In Austria, large expansions in subsidized child care had “zero effect on mothers’ careers, in the short run as well as in the long run,” and Quebec’s $5-per-day government child care led to “striking evidence that children are worse off in a variety of behavioral and health dimensions,” and “that the new child care program led to more hostile, less consistent parenting, worse parental health, and lower-quality parental relationships.”

Instead of trying to impose the outcomes of one person’s or one gender’s choices and aspirations onto another, policymakers and employers should help to expand the freedom and opportunity of all workers and all families to pursue what works best for them.