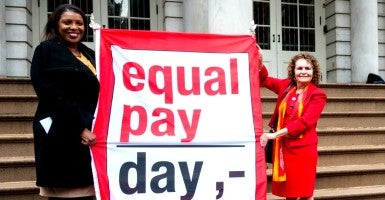 Equal Pay Day is a harmful and misleading ploy to convince women they are victims of discrimination—discrimination that requires government intervention. (Photo: Richard Levine/Newscom)

Women’s advocacy groups have declared today, April 12, “Equal Pay Day”—the alleged day through which women must work to earn the same amount as men in the previous year.

But it looks as though the women’s advocacy groups have miscalculated equal pay day. Even based on a very broad measure of pay—one that ignore the types of jobs men and women perform, their education and experience, their work schedules, the benefits they receive, and just about everything else that employers consider when deciding pay—women make 83 cents on the dollar compared to men.

According to this more recent statistic, Equal Pay Day would have occurred on March 17.

But those are some pretty important factors to ignore. According to a study commissioned by the Department of Labor, controlling for observable factors such as education, experience, occupation, and time out of the labor force reduces the wage gap to only five cents.

At five cents, Equal Pay Day would have occurred back on January 18.

Even that statistic, however, fails to account for unobservable factors such as flexible hours, teleworking, and added benefits—all things that women tend to value more than men.

Adding in these unobservable factors would likely shift Equal Pay Day back even farther, perhaps eliminating it altogether.

Equal Pay Day is a harmful and misleading ploy to convince women they are victims of discrimination—discrimination that requires government intervention.

Equal Pay Day says almost nothing about the status of women in the workplace and the gains they have made.

Women have equal or lower unemployment rates than men; they are more likely to earn a college degree; their earnings have been on the rise; and women have made significant strides in creating more family-friendly and flexible work environments.

Most women don’t want one-size-fits-all jobs that misdirected equal pay legislation would produce. Contentment in work—and life in general—is about more than comparing one’s paycheck to another’s, and oftentimes, men and women alike are willing to sacrifice higher pay for job conditions that match their own priorities.