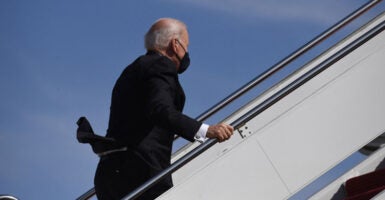 President Joe Biden was all right after he stumbled three times Friday in “very windy” weather while boarding Air Force One, a White House spokeswoman said.

Biden twice stumbled, catching himself on the steps, and then fell down while climbing to board Air Force One, video footage shows. Biden got up and proceeded onto the presidential jet after the fall.

“So, as you know, it’s pretty windy outside, it’s very windy. I almost fell coming up the steps myself,” White House principal deputy press secretary Karine Jean-Pierre told reporters in the press pool on Air Force One bound for Atlanta, CNN reported. “He is doing 100% fine.”

The White House spokeswoman didn’t comment on whether the president, 78, hurt the foot that he broke weeks before taking office, CNN reported.

The president slipped in November while he played with his dog, Major, resulting in a fractured foot, according to a February CNN report.

“He’s doing great. All I can tell you is he’s doing fine,” Jean-Pierre said.