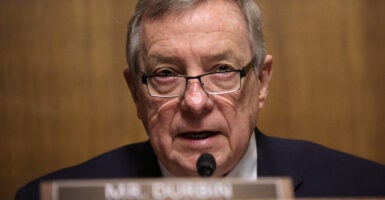 The Senate Judiciary Committee held hearings Wednesday on the so-called Equality Act, a piece of legislation unparalleled in its hostility to religious liberty and that elevates sexual orientation and gender identity to protected-class status alongside race, sex, and national origin in the Civil Rights Act of 1964.

The Equality Act also expands the definition of “public accommodation” under federal law, and recipients of any federal funding—such as schools—would be directly affected by the act if it becomes law. It has already passed the House of Representatives.

Plenty of ink has been spilled on the disastrous consequences the Equality Act would have on the administration of school sports, locker rooms, and bathrooms.

But what of the curriculum the Equality Act might force schools to teach? Could it compel teachers to peddle unscientific notions that gender is “fluid,” or that a student’s subjective self-identity is superior to the biological reality of his or her chromosomal makeup?

Unfortunately, due to some legal sleight of hand, the answer is very likely “yes.”

No provision of a program administered by the Secretary or by any other officer of the Department shall be construed to authorize the Secretary or any such officer to exercise any direction, supervision, or control over the curriculum, program of instruction, administration, or personnel of any educational institution, school, or school system … except to the extent authorized by law.

However, federal courts have recognized that in certain circumstances, federal involvement in education is warranted. To remedy past segregation, for example, some federal courts have required schools to remove educational materials considered racially biased, or to expand curricula to include black history. Both are reasonable means to meet the congressional goal of eliminating discrimination against blacks as articulated in the Civil Rights Act.

Those cases stem from a body of law focused on “equity jurisdiction.” Under this principle, once the legal right of an individual (or class of individuals) and a violation of that right have been proven, a federal court’s power to remedy past wrongs is quite broad.

It can include (and has included) changes to curriculums and teaching materials in order to eliminate both actual (“de facto”) and legal (“de jure”) segregation of school students.

In United States v. School District 151 (1968), a federal district court concluded it had the power to decide all issues concerning alleged discrimination in public education, including school board policies, the allocation of faculty and staff, the location and construction of schools, the transportation of students, and the general educational structure and process.

In order to remedy ongoing discrimination, another federal district court judge in Hoots v. Commonwealth of Pennsylvania (2000) “ordered that remedies for the constitutional violation proceed along several fronts … [and] ordered a comprehensive redesign of curriculum and testing, so that the curriculum would be appropriate for heterogeneous, multicultural, detracked classrooms and that the effectiveness of [the] redesigned curriculum would be carefully monitored through proper assessments.”

While—thus far—federal courts have yet to flex their “equity” muscle within the context of LGBTQ students and rectifying ongoing discrimination, the Equality Act would amend Title IV of the Civil Rights Act of 1964 to give sexual orientation and gender identity the same legal protections as immutable characteristics like race, sex, or national origin. Those have been historically recognized as nothing more than due to an accident of birth, and therefore deserving of heightened protection and stricter analysis.

Now substitute the words “gender identity” for “race,” and there’s nothing to prevent a court from ordering the same kind of equitable remedy—curricular or otherwise—with respect to what a student might argue is a discriminatory educational setting.

Neutral education policies don’t always cut it, either. In Adams v. United States (1980), the 8th U.S. Circuit Court of Appeals sitting en banc held that a “racially neutral” assignment plan proposed by school authorities was inadequate, because it failed to “counteract the continuing effects of past school segregation.”

Organizations such as the Human Rights Campaign have cleverly drawn unflinching parallels between LGBTQ and black youths, using the buzzwords of American jurisprudence on anti-discrimination law, likening the struggle of pre-Civil Rights Act segregated blacks to LGBTQ individuals who are themselves segregated and denied equal protection under the law.

In so doing, they’ve teed up a post-Equality Act legal challenge for students whose educational environment isn’t sufficiently desegregated. (That is, it still teaches the “discriminatory” scientific notion that male and female are unchanging biological distinctions.)

In a pre-Equality Act era, educational dissenters—who, like millions of Americans holding faiths that dictate a gender binary and heterosexual marriage as a societal ideal—would have had the right to object to forced action or offensive curriculum pursuant to the Religious Freedom Restoration Act.

Indeed, Congress expressly applied the Religious Freedom Restoration Act to all federal law, statutory or otherwise, whether adopted before or after its enactment—including all laws governing education programs, such as Title IX of the Education Amendments Act of 1972, the Family Educational Rights and Privacy Act, Title I of the Elementary and Secondary Education Act of 1965, and the Higher Education Act.

However, the Religious Freedom Restoration Act contains a critical exception: It does not apply if the statute explicitly excludes its application.

As is all too evident now, the Democratic drafters of the Equality Act took careful measures to make sure that under the bill, the Religious Freedom Restoration Act could not be used as a shield by the millions of individuals—whether teachers, students, parents, or school administrators—holding sincere objections of conscience based on their religious beliefs.

How about religious schools? Surely, students in parochial schools won’t be subjected to dogma eliminating any recognition of male and female, right?

Wrong again. The Equality Act could very well steamroll propaganda touting the political agenda of sexual orientation and gender identity advocates through the schoolhouse doors if the religious schools accept any funding under federal law.

Take, for example, free and reduced-price lunch programs for low-income students, or admission of students on federally funded scholarships according to Title VI.

Liberal University of Virginia law professor Douglas Laycock (in whose class I once sat) has recognized the breathlessly slim religious liberty exemptions that could still be maintained by religious schools post-Equality Act:

Schools would still have the ministerial exception … which should protect them with respect to teachers teaching a religion class, or leading chapel services, but courts have generally held that other teachers are not ministers for purposes of the exception.

Think a federalized sexual orientation and gender identity curriculum would be too hard to implement?

Arne Duncan, secretary of education under President Barack Obama, used a carrot-and-stick funding approach to incentivize states to adopt the Common Core state standards and oversaw development of two testing consortia to assess whether uniform standards were being met. The result? Equivalent teaching geared toward the same outcomes across the country.

The Equality Act doesn’t just rewrite the entire canon of American law on discrimination. It takes a swing at long-standing protections for religious liberty and local control of education.