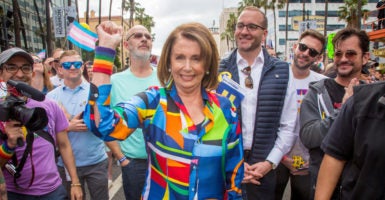 Women shouldn’t have to compete against men in order to play sports.

Yet that’s exactly what is happening increasingly across the country and around the world, as a growing number of male athletes who self-identify as women are being allowed to enter women’s competitions.

The so-called Equality Act would only worsen this trend. This piece of federal legislation, being pushed by House Speaker Nancy Pelosi, D-Calif., would create a civil right for male athletes to self-identify as females at any time, without any evidence of physical changes to their bodies.

It would spell “the end of women’s sports,” in the words of Duke University Law School professor Doriane Lambelet Coleman, who testified against the bill at a recent House Judiciary Committee hearing.

But at that hearing, Sunu Chandy of the National Women’s Law Center trivialized these concerns. She stated, “We do not create policy about myths and stereotypes … There’s no research to support the claim that allowing trans athletes to play on teams that fit their gender identity will create a competitive imbalance.”

Yet such evidence does exist. There is plenty of empirical evidence showing that replacing “sex” with “gender identity” as a criterion for entry into athletic competition would eliminate opportunities for the athletic abilities of large numbers of women to be properly recognized.

In the case of Mack Beggs, a female wrestler who identifies as male, she was allowed to take testosterone. That led three of her female competitors to forfeit the competition out of fear of being injured.

As Coleman testified in the hearing, “So overwhelming is the advantage of testosterone that thousands of men and boys could defeat the female Olympic gold medalists in the 400 meters.”

She also wrote in The New York Times, “It doesn’t matter that there are 100 females and three males in a girls’ race if the three males win spots in the final or on the podium because they are males.”

>>> Her Daughter Has to Compete Against Biological Males in Track. Now This Mom Is Speaking Out.

In 1972, Congress passed Title IX of the 1972 Educational Amendments to the Civil Rights Act, which ordered schools to create separate athletic teams for women. Congress didn’t simply tell schools to let women compete for spots on men’s teams. That would have been self-defeating, as only a few exceptional female athletes would win spots due to men’s greater physical power, strength, and speed.

Yet despite ample scientific evidence of males’ physical advantages over females, supporters of the Equality Act like Yale University School of Law professor Kenji Yoshino insist that “trans women have not broadly displaced or disadvantaged non-trans women or girls when allowed to compete in accordance with their gender.”

But even without the Equality Act, women and girls are losing titles, medals, and scholarship opportunities in states where gender identity has already replaced sex. H.R. 5 would dramatically accelerate and expand these adverse impacts on females by requiring athletic programs to recognize gender identity as a protected class in order to receive federal funding.

Here are 10 examples of male athletes identifying as women in female sports. Under the Equality Act, we could only expect more of this.

In the last example, 16-year-old Selina Soule described the race as “demoralizing” because, when male athletes enter women and girls races, everyone knows who will win before the race begins. Even worse, her chances of being seen by college scouts disappeared when Yearwood and Miller took top spots at the state championships.

Soule said she chose to speak out so that no other girl athlete would face the same disappointment. Hopefully, Congress will listen to voices like hers before it’s too late.