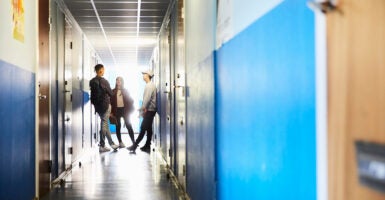 The Equality Act would mandate that schools across the country allow students who identify as transgender to access the opposite sex’s restrooms, locker rooms, and showers. (Photo: Maskot/Getty Images)

Former Vice President Joe Biden, the Democratic nominee for president, has declared passing and signing the Equality Act to be among his top legislative priorities to be completed in his first 100 days in office.

This legislation, which the House of Representatives passed last year, would add sexual orientation and gender identity as protected categories under the Civil Rights Act.

But rather than shielding Americans who identify as LGBT from unfair discrimination, the bill’s provisions would be weaponized by activists against anyone who disagrees with their radical and politicized ideology. This ideology is out of touch with the majority of Americans and would particularly harm vulnerable children.

The Equality Act’s impact would be felt in a number of areas, including medicine, education, sports, and parental rights.

1. Curriculum: The bill could lead to federal courts or future presidential administrations imposing a nationwide mandate to incorporate sexual orientation and gender identity into the curriculum in all public schools.

A number of states already use similar curriculum, including graphic and age-inappropriate sex education for children as young as kindergarten and requiring the inclusion of LGBT history.

These schools frequently find ways to circumvent standard parental notification and opt-out procedures, as LGBT activists’ stated goal is to reach children whose parents are not “affirming” of gender ideology. Parents can expect similar developments on a national scale if the Equality Act becomes law.

2. Schools: The Equality Act would also affect children at school. First, it would mandate that schools across the country allow students who identify as transgender to access the opposite sex’s restrooms, locker rooms, and showers. It would also require them to allow biological males to compete on girls sports teams, where they have a clear physical advantage.

Other provisions of the bill could, under the guise of preventing bullying and harassment, require teachers and students to use the preferred names and pronouns of those who identify as transgender.

3. Medicine: The Equality Act would require medical professionals to perform irreversible gender-transition procedures on minors, regardless of conscientious objection or best medical judgment.

The experimental use of puberty blockers and cross-sex hormones on children can carry serious consequences, including delayed brain development and permanent sterility.

The bill’s findings also pave the way for an eventual ban on any counseling intended to help children with gender dysphoria accept their bodies. Given that 80%-95% of children eventually come to identify with their biological sex if they do not undergo social transition, employing federal law to ban counseling for children is a mistake.

Faith-based adoption and foster care providers would risk losing federal funds if they decline to place children with same-sex couples. This in turn could lead to these providers being forced to close, displacing thousands of children and further straining an already overwhelmed system.

Prospective foster parents could also be required to affirm a foster child’s stated gender identity and barred from any efforts to help a child with gender dysphoria accept his or her body.

The majority of Americans oppose these policies, and many more are likely to have reservations about them. A Heritage Foundation poll showed 66% of parents are opposed to curriculum like California’s Healthy Youth Act that teaches children about sexual orientation and gender identity.

In another Heritage poll, nearly 60% of those surveyed oppose the Equality Act’s provisions on transgender medical treatment, counseling bans for children with gender dysphoria, and allowing biological males to compete on girls sports teams.

A majority opposed allowing students to use the opposite sex’s restrooms and locker rooms at schools, and 43% opposed requiring the use of preferred names and pronouns of students who identify as transgender. Around one-fourth of respondents said they did not know or preferred not to answer each question, reflecting a high level of uncertainty about a sensitive topic.

The activist left has labeled all disagreement as bigotry, stifling the voices of those who raise concerns. Policies such as the Equality Act—which are being promoted by a presidential campaign and endorsed by one house of Congress—would turn the shield of anti-discrimination law into a sword to punish disagreement, with the youngest Americans as collateral damage.

Children are not pawns to be manipulated for the sake of adult political disputes, and Americans should reject this bill’s approach to their safety and welfare.