Extremist, Anti-Constitutional Propaganda Has No Place in Navy 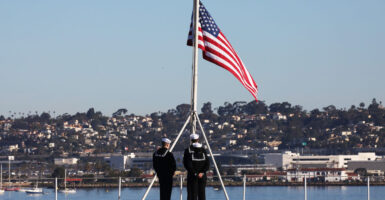 The Navy chief of operations’ reading list currently includes a book, “How to Be an Antiracist” by Ibram X. Kendi, that contradicts the oath taken by Navy sailors. Pictured: Navy sailors prepare to take down the flag on the flight deck of the USS Nimitz aircraft carrier on Jan. 18, 2020, in Coronado, California. (Photo: Mario Tama/Getty Images) 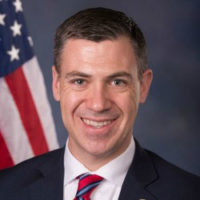 When I joined the U.S. Navy reserves in 2012, I swore an oath to “bear true faith and allegiance” to the U.S. Constitution.

Since then, I’ve met sailors from all across America, and nearly all of them come from backgrounds very different from mine. The Navy is a truly diverse organization, so it’s natural that I’ve had my fair share of disagreements with sailors on questions of politics and faith—but I’ve never met one who doesn’t take that oath as seriously as I do.

That’s why I was horrified to see a book on the Navy chief of operations’ reading list that directly contradicts the Navy’s oath. Ibram X. Kendi’s “How to Be an Antiracist” is extremist, anti-American, and divisive, and should not be officially promoted by any part of our government.

Its main contention is that everything in the world can be divided into two moral categories, racist or anti-racist.

A person is racist only if he supports polices that result in or contribute to inequitable racial outcomes. According to Kendi, “Capitalism is essentially racist,” and so, by extension, are capitalists. America is, of course, also racist, and so is the Constitution and those who uphold their oath to defend it.

Kendi’s ideas will hurt our Navy for the same reasons that any other type of extremism would hurt our military. Why would Americans fight and die for a country that is morally corrupt?

The military has consistently been one of the most trusted and popular institutions in America for the exact same reason that Congress has a 10% approval rating. It is because the military never has been—and was never intended to be—a political institution. But today, just 56% of Americans say they have “a great deal of trust and confidence” in our military, compared to 70% in 2018.

Currently, the Pentagon is in the middle of a 60-day review to combat “extremism” in the military. They are right to be concerned about extremism, which has no place in our armed services.

Books that condemn America on moral grounds, and advocate for the dissolution of the Constitution, are, by definition, extremist.

As the Pentagon conducts its review, it should carefully examine the contents of the Navy chief of operations’ reading list, and remove extremist propaganda—like Kendi’s book.