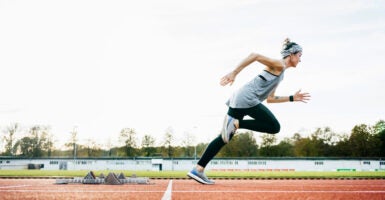 Mississippi Gov. Tate Reeves has signed a bill into law barring transgender athletes in public schools and colleges from competing in women’s sports.

The bill, SB 2536, is the first of such legislation to be signed into law this year, though similar initiatives have appeared in other states across the country. South Dakota’s Senate sent a similar bill to the desk of Gov. Kristi Noem, a Republican, on March 8.

The legislation’s supporters have argued that such bills are necessary to ensure fairness in women’s sports, saying that trans women have a physical advantage over biological women in athletics.

“This important piece of legislation will ensure that young girls in Mississippi have a fair, level playing field in public schools,” Reeves, a Republican, said Thursday at a bill signing event.

The bill sailed through the state’s Republican-dominated Legislature, passing the state House by a vote of 81-28 and the state Senate 34-9.

I never imagined dealing with this, but POTUS left us no choice. One of his first acts was to sign an EO encouraging transgenderism in children. So today, I proudly signed the Mississippi Fairness Act to ensure young girls are not forced to compete against biological males. pic.twitter.com/INZgKQRMJr

Critics of the bill, however, have argued that it is discriminatory against transgender students.

Alphonso David, president of the Human Rights Campaign, the nation’s largest LGBTQ rights group, called Reeves’ anti-transgender push “appalling,” and said the law is “a solution in search of a problem,” according to a statement.

Mississippi lawmakers have not “provided any examples of Mississippi transgender athletes gaming the system for a competitive advantage because none exist,” David said in the statement following Reeves’ signing event.

Other critics likened the bill to Republican-led bathroom bills several years ago, which sought to mandate that people use restrooms corresponding to their biological sex.

“Just like it was never about restrooms, this bill is not about sports,” Chase Strangio, the American Civil Liberties Union’s deputy director for trans justice, told Law and Crime. “It’s about pushing trans people out of public life.”