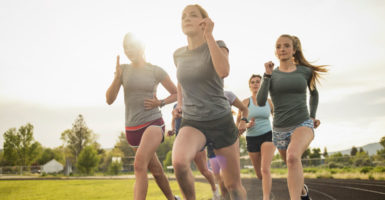 If a lawsuit in Idaho is successful, female athletes could be forced to compete against biological males who say they identify as female. (Photo illustration: Tony Anderson/Getty Images)

Two female college athletes in Idaho are trying to preserve the right of all female athletes to compete only against other women.

Idaho state lawmakers already passed legislation called the Fairness in Women’s Sports Act ensuring equality for women in sports. Now, the American Civil Liberties Union has filed a lawsuit in federal court on behalf of a male athlete who challenges the new law.

If the suit is successful, female athletes could be forced to compete against biological males who say they identify as female.

Madison Kenyon and Mary Kate Marshall run track and cross-country at Idaho State University in Pocatello. They filed a motion in federal court to intervene in the lawsuit challenging the state’s Fairness in Women’s Sports Act, which Gov. Brad Little, a Republican, signed into law.

Because of their collegiate experience and athletic prowess, Kenyon and Marshall understand the biological differences between men and women, and why the Idaho law should remain intact.

The motion to intervene filed by Kenyon and Marshall with the U.S. District Court for the District of Idaho in the case of Hecox v. Little explains:

The inequity of male athletic participation in their competitions touches the female participants, and their own perspective and argument is a necessary feature when the issues in contest land so personally with them. … As intervenors, [Kenyon and Marshall] would provide this Court with a perspective otherwise out of view, thereby aiding in the disposition of the case.

“We’re grateful Gov. Little signed the Fairness in Women’s Sports Act into law because it seeks to protect girls and women across Idaho,” Holcomb said. “Our clients have already experienced the deflating experience of losing to a male runner, and this should not be allowed to continue.”

What’s interesting about this case is that the Idaho law that has caused such an uproar isn’t out of place. In fact, it shouldn’t have been necessary to safeguard women in sports. That’s what Title IX was for in the first place.

But some transgender athletes and organizations such as the ACLU have attempted to upend the reality of gender, demand that it be recognized as fluid, and twisted Title IX to refer to gender identity and sex equally, as if they are the same.

So it has become increasingly necessary to spell out the provisions of Title IX, the biological differences between men and women, and how both relate to the world of sports.

“I believe that allowing males to enter women’s sports defeats an entire aspect of sports: It eliminates the connection between an athlete’s effort and her success,” Kenyon said.

“Sex separation in sports helps ensure that males and females each enjoy opportunities for fair competition and victory,” the college athlete said. “It helps ensure that, if women like me work hard, that hard work pays off, and we have a shot at winning.”

Kenyon and Marshall, two college women who have worked hard for over a decade to excel in their sport of choice, shouldn’t have to intervene in a challenge to a law passed to safeguard their rights. They shouldn’t have to spell out the obvious truth that biological males possess innate physiological advantages that would render competition alongside them unfair for women.

Anti-discrimination laws such as Title IX and the Idaho statute in question exist on the presumption that a steadfast distinction exists between the two sexes that is not only obvious but essential.

That these two brave athletes must intervene in a lawsuit attempting to upend such lawfully passed state legislation is unfortunate. That this lawsuit also attempts to strip these two women of their biological makeup and what they have rightfully earned as athletes shows just how much damage transgender ideology—with the help of the ACLU—aims to do to women in sports.