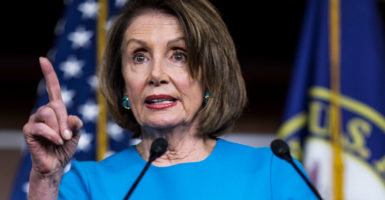 The legislation, called the Equality Act, is expected to be voted on Friday in the House.

House Minority Leader Kevin McCarthy, in a statement provided to The Daily Signal, called the bill “another mirage” created by Democrats.

“The Democrats’ latest piece of legislation is another mirage, packaged with a deceiving title, that ultimately chips away at our religious freedoms, would jeopardize Title IX sports programs, and puts our children at risk by eliminating parental consent in life-altering medical procedures,” McCarthy said.

The bill would add sexual orientation and gender identity to characteristics—race, color, religion, sex, or national origin—protected from discrimination under the 1964 Civil Rights Act.

“The ‘Inequality’ Act imposes … top-down, government-led discrimination against all Americans who hold a differing view of human sexuality and gender,” Hartzler said.

By inserting sexual orientation and gender identity into current anti-discrimination law, the bill would make hospitals and doctors vulnerable to litigation “if they don’t follow the medical recommendations of the transgender movement,” Emilie Kao, director of The Heritage Foundation’s DeVos Center for Religion & Civil Society, wrote in a recent op-ed.

An explainer from Heritage argues that the Equality Act would force Americans “to conform to new sexual norms or else lose their businesses and jobs,” and coerce medical professionals into facilitating abortion and other procedures that violate their conscience rights.

If passed, the Equality Act would hurt women by “dismantling sex-specific facilities, sports, and other female-only spaces,” the think tank’s explainer said, as well as compromise the work of charities and volunteers.

Pelosi, D-Calif., has said Congress should pass the bill to give equal rights to those who identify as lesbian, gay, bisexual, or transgender.

“The legislation is a top priority because equality for the LGBTQ community is a top priority for us,” Pelosi said. “But our work isn’t done just because we’ve passed these bills. All the progress we make just opens the door for more progress that is needed.”

“This irresponsible bill carries grave consequences that will do damage to our federal civil rights laws as we know them,” McCarthy told The Daily Signal.

“Republicans in our conference strongly stand against discrimination wherever it exists, and we will also continue to hold the line in protecting religious freedoms to ensure it is a right that all Americans are able to exercise,” he said.

Lauren Fine, spokeswoman for House Minority Whip Steve Scalise, told The Daily Signal in an email that citizens who oppose discrimination should oppose the Equality Act, known as HR 5 in the House.

“Americans oppose discrimination, and everyone should be treated with respect. HR 5, however, is a liberal overreach that would harm children, gut protections for women, deny religious freedom protections, and provide additional abortion rights,” Fine said.

Among those joining Hartzler for her press conference were leaders of various advocacy organizations, including Concerned Women for America, the Women’s Liberation Front, Family Research Council, Alliance Defending Freedom, and the Susan B. Anthony List.

“I really think HR 5 should be renamed to ‘Forfeiting Women’s Rights Act,’” Lesko said. “It takes away rights of women and girls that we have fought for for years.”

Under penalty of federal law, Lesko said, the bill would mandate that “facilities like schools, churches, domeratories, [and] shelters allow biological males in women’s and girls’ bathrooms, showers, sleeping areas, [and] locker rooms, violating women’s privacy, and potentially their safety.”

Rep. Carol Miller, R-W.Va., said she is most bothered by the bill’s attack on unborn children.

“One of the most unconscionable components of this bill is how it devalues life. Under the ‘Inequality Act,’ my liberal colleagues want to create a universal right to abortion right up to the moment of birth. And not only that, they want to force you, the taxpayer, to pay for it,” Miller said.

“I am disgusted, disgusted, and I am so saddened to the core of my being,” she said. “We must stand up for life, and we must protect our most innocent and vulnerable citizens.”

Rep. Mike Johnson, R-La., chairman of the House Republican Study Committee, said in a statement provided to The Daily Signal that the bill would allow government to tell Americans what to believe.

“This bill would eviscerate constitutionally protected rights by empowering the federal government to force employers, medical professionals, parents, business owners, and all Americans to act in violation of their conscience,” Johnson said. “The federal government should not be able to dictate a belief system.”