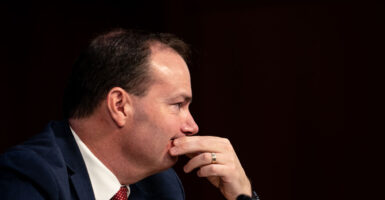 Sen. Mike Lee, R-Utah, introduced the Mens Rea Reform Act of 2021 on Thursday. This is a major step in the right direction for reforming our nation’s federal criminal laws. (Photo: Erin Schaff-Pool/Getty Images)

Nicole Imhof is a 2020 graduate of the University of Massachusetts Amherst and a member of the Young Leaders Program at The Heritage Foundation.

Before he retired in 2018, Sen. Orrin Hatch, R-Utah, was a tireless champion for reforming criminal law. Now, it seems as though Republican Sen. Mike Lee, now the senior senator from Utah, is picking up where Hatch left off, by introducing the Mens Rea Reform Act of 2021, which is being co-sponsored by Sens. Rand Paul, R-Ky., and Thom Tillis, R-N.C.

“Mens rea,” which is Latin for “guilty mind,” is a fundamental legal concept that asserts that a person should only be criminally liable for conduct that at a reasonable person would know to be wrong.

In an era when Congress has proven all too willing to ignore the fundamental moral distinctions between inherently immoral acts that truly deserve criminal sanction and accidents, mistakes, and other types of misconduct—which are best addressed through civil and administrative law—this bill is a welcome attempt to reform a draconian system.

As one of us (John Malcolm) has previously written:

Proof of “mens rea”—a guilty mind—has traditionally been required to punish someone for a crime because intentional wrongdoing is more morally culpable than accidental wrongdoing; our justice system has usually been content to evaluate accidents that injure others as civil wrongs, but criminal punishment has been reserved for people who do bad acts on purpose.

But that has changed as legislators and regulators have begun to see the criminal justice system not as a forum for ascertaining moral blameworthiness and meting out punishment accordingly, but as just another tool in the technocratic toolbox for shaping society and preventing social harm.

Over the years, Congress and regulatory agencies have created innumerable criminal offenses lacking clear—and in some cases any—”mens rea” requirements. This can result in people being branded as criminals for violating laws or regulations that they did not know existed, had no intent to violate, and would not have understood to apply to their actions even if they had known about them.

Lee’s bill, if enacted, would apply to any federal law or regulation that is punishable by imprisonment and/or a fine of at least $2,500. If the law already provides a “mens rea” standard, even a weak one, such as “negligently,” then the law would be applied as written.

For criminal laws that lack a state-of-mind requirement, however, a default standard of “willfully” would be inserted, meaning that the government would have to prove that a person acted with the knowledge that his or her conduct was unlawful or with the intent to take actions that result in unlawful behavior. This default standard would apply to every element of the offense (unless Congress specifically provides otherwise), except for the elements relating to venue and subject matter jurisdiction.

Under the terms of the bill, Congress would remain free to pass a strict liability criminal offense—that is, one with no state of mind requirement. In order to do so, however, Congress would have to explicitly state its intention to omit a “mens rea” standard from the covered offense, and the mere absence of a “mens rea” standard could not be interpreted as evincing such an intent.

In a press release, Lee stated:

Prosecutors should have to show a suspect had a guilty mind, not just that they committed an illegal act, before an American citizen is put behind bars. Unfortunately, our federal laws contain far too many provisions that do not require prosecutors to prove a defendant intended to commit a crime. The result is a criminal justice system that over-penalizes innocent acts, which only undermines the rule of law.

We are living in a society that is becoming increasingly unforgiving, and where it often seems as though wrongdoers are presumed to be guilty until proven innocent. We now have so many criminal laws and regulations that carry criminal penalties interspersed throughout the federal code, as well as the even-more-voluminous Code of Federal Regulations—most of which are inaccessible to the average person—that nobody feels safe, and everyone ends up walking on eggshells.

Restoring faith in our criminal justice system, decreasing overcriminalization, and working towards a more traditional view of criminal law—in which a “bad act” and a “guilty mind” are both necessary elements for criminal punishment—is the goal of Lee’s bill. This is a laudable goal.

It is completely appropriate to bring the full weight of the criminal justice system down on someone who intentionally violates a law for some personal gain. It is also appropriate to hold someone criminally liable if he or she intentionally “puts blinders on” and commits a harmful act, knowing that there is a substantial risk that such conduct will cause harm.

But let’s face it, there is a lot of baggage that comes with being convicted of a crime. Absent extraordinary circumstances, we should reserve that label for those who commit morally blameworthy acts with some awareness that they were doing something that was wrong when they acted.

We should not be so cavalier about labeling someone a criminal, even when they do something unwittingly that causes harm. After all, as Oliver Wendell Holmes once wrote, “Even a dog knows the difference between being kicked and being stumbled over.”

Kudos to Lee for introducing this important bill.  The Mens Rea Reform Act of 2021 is a major step in the right direction towards restoring respect for, and the moral force of, our nation’s federal criminal laws.