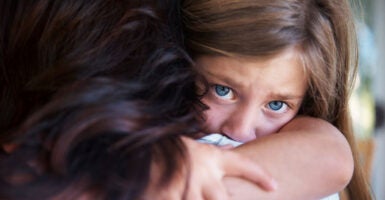 Two bills being considered by Congress, the Violence Against Women Reauthorization Act and the Stronger Child Abuse Prevention and Treatment Act, undermine the safety of those they are meant to protect: women and children. (Photo: shapecharge/Getty Images)

Abuse of any kind must be condemned and stopped wherever it is found. Sadly, two bills that are currently being considered in Congress—intended to prevent and treat child abuse and violence against women—will only further contribute to the abuse of children and women in America.

Consider the Stronger Child Abuse Prevention and Treatment Act. The bill changes funding requirements to ensure that states who receive federal support for abuse prevention integrate their efforts with organizations and individuals that have experience working with, and will maximize the participation of, “sexual and gender minority” children.

Where vague language like “sexual and gender minority” or “sexual orientation and gender identity” has been included in local or state policy, those policies have been exploited by progressives to impose their transgender ideology as orthodoxy in medicine, counseling, and foster care and adoption.

For example, in 2018, the city of Philadelphia’s sexual orientation and gender identity policies shut down Catholic Social Services for operating according to its religious belief that every child deserves a mother and a father.

This bill could have the same kind of impact, but now with the support of federal law. By changing the federal funding requirements for abuse prevention to now include “sexual and gender” minorities, the bill could pressure states that receive such assistance to make “gender-affirming” care the standard—for medicine, for counseling, for foster and adoption care, and for parents.

In the medicine and counseling fields, this kind of care looks like encouraging and performing physical interventions—whether by means of puberty blockers, cross-sex hormones, or surgery—that affirm a person’s self-proclaimed gender identity.

By pressuring states to accept “gender-affirming” care as normative, this could ultimately lead to state power creeping into homes to replace parents.

Given its vague and undefined language, this legislation could be used by progressive activists to reinterpret what qualifies as abuse to include parents’ refusal of hormonal or physical interventions to “affirm” their child’s self-proclaimed gender identity. Should this happen, the state could step in to challenge parents’ rights to raise their children according to what they believe is best.

This language could also be exploited by activists to redefine eligibility requirements for adoption or foster care. Parents looking to adopt or foster children struggling with gender identity may be deemed ineligible by placement agencies should they be hesitant to “affirm” that child’s self-proclaimed gender identity.

Sadly, such tragic custody battles have already happened. In 2019, an Ohio judge removed a 17-year-old girl from her parents’ custody after they refused to allow doctors to help her “transition” with testosterone. By injecting the Stronger Child Abuse Prevention and Treatment Act with sexual and gender identity language, the bill could lead to more cases like this.

Just as with Stronger Child Abuse Prevention and Treatment Act, the sexual orientation and gender identity language in the Violence Against Women Reauthorization Act also undermines the safety of those it is meant to protect: women.

Under federal law, the Violence Against Women Reauthorization Act would require women’s shelters to take in biological males who identify as women. These shelters help women to get away from their abusers, but the bill as it stands would embolden male predators to prey upon abused women, since they would be able to gain access by merely self-identifying as a woman.

Additionally, the bill requires that female-only prisons admit biological males who identify as women. This leaves females in these prisons, whether inmate or employee, vulnerable to sexual predators.

Just this week, an employee from a women’s correctional facility in Pierce County, Washington—a state that allows self-identifying transgender inmates to be housed in the prisons of their choosing—reported that an inmate transferred from a male facility raped a female on the day of his arrival.

Two other trans-identifying biological males have also been transferred to that same women’s facility—both with histories of sexual assault. The Violence Against Women Reauthorization Act will make tragic incidents of abuse like this one only more common, not less.

Ultimately, having been injected with progressives’ viewpoints of sex and gender, these two bills will only increase violence against women and child abuse.