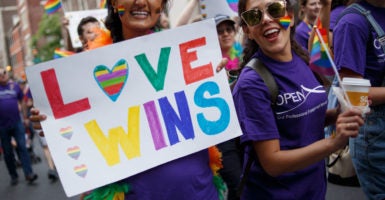 Although at least 250 children in Philadelphia are in need of foster homes, 35 homes willing to take them in are still waiting—and the private religious charity that could bring them together is fighting back against a city that doesn’t want its help.

“[The city of Philadelphia made this decision] because of Catholic Social Services’ religious beliefs regarding marriage,” Lori Windham, senior counsel at the Becket Fund for Religious Liberty, said in a recent conference call for the press. Becket is a nonprofit public interest law firm that defends the freedom of religion.

While Catholic Social Services does not require applicants to be Catholic, applicants do have to be married, although single parents are eligible if the birth parent of the child is OK with it. Its website does not specify sexual-orientation requirements for applicants.

“Although there is no evidence that any person has ever been harmed by those religious beliefs, the city has chosen some particularly punitive actions,” said Windham. “Unless there is urgent court action to protect these plaintiffs’ rights, then Catholic Social Services will have to begin the process of shutting down.”

In response, three foster care families and Catholic Social Services filed a lawsuit against the city of Philadelphia, Sharonell Fulton, et al. v. City of Philadelphia, in May. On June 5, Becket filed for a temporary restraining order and a motion for preliminary injunction on behalf of Catholic Social Services to temporarily prevent Philadelphia from canceling the city’s contract. The federal district court case then had a three-day hearing late last month.

“This is direct and discriminatory targeting by the city. This is exactly the sort of thing that is not permitted under the [Free Exercise of Religion Clause of the Constitution] and the First Amendment,” said Windham.

On June 28, on the third day of the hearing, new information emerged that makes Catholic Social Services’ case stronger, she said.

One such detail was that the city’s decision to sever its relationship with Catholic Social Services originated from a March press inquiry about foster care. As a result, Philadelphia Department of Human Services Commissioner Cynthia F. Figueroa and her first deputy called religious social services providers to ask them about their LGBT foster-parent policies, Windham said.

“They only called the religious foster care providers in the city,” she said. “When they did not get the answer they wanted from Catholic Social Services, they summoned their leadership to City Hall, where—after a conversation with the mayor—the commissioner told Catholic Social Services that it’s not 100 years ago, and that times have changed, and that they needed to be listening to Pope Francis.” In 2013, Francis suggested that the Catholic Church should not condemn homosexuality and could accept civil unions.

Shortly after the conversation, Catholic Social Services was notified that the city had decided to discontinue working with it.

However, after looking into Catholic Social Services’ policies and actions regarding LGBT foster care families, the information presented June 28 showed that the private agency had no history of turning away LGBT couples. Instead, children referred by the city, regardless of religion or sexual orientation, would be placed with Catholic Social Services client families.

It also showed that there was no evidence that an LGBT couple had been unable to complete a home study and certification process, a training program for certification to adopt or foster children, because of Catholic Social Services.

“After three days of evidence and testimony, the evidence showed that not a single [gay] couple approached Catholic Social Services and asked them to perform [the home study and certification] process for them,” said Windham in the press call. “And so what we have here is an entirely hypothetical situation, and because of a hypothetical situation, the city has chosen to take action that can have very real harm.”

The city claims to have a blanket referral policy for social service programs. Foster care agencies commonly make referrals for reasons such as geographic proximity and specialization in certain areas.

Windham contends that Philadelphia has not been following this rule. She said it only allows referrals for secular purposes, not religious ones, despite the fact that its blanket rule allows parents to choose what agency they want to work with.

“[Right now], there is at least one award-winning foster parent’s home that is sitting empty: Cecilia Paul, who was formally named ‘Foster Parent of the Year’ by the city of Philadelphia,” said Windham. “She has been fostering children for over 40 years [through Catholic Social Services], and today her home sits empty.”

“We have not cut ties with Catholic Social Services,” said Alicia Taylor, director of communications for Philadelphia’s Department of Human Services in a phone interview with The Daily Signal.

The department wrote in an email to The Daily Signal that Catholic Social Services had not upheld part of its contract with the city by not allowing same-sex couples to become foster parents.

“While the city greatly appreciates the services that Catholic Social Services (CSS) provides, we must ensure those services are provided in a non-discriminatory manner, according to the City’s Fair Practices Ordinance,” the Department of Human Services said in its emailed statement. “Regrettably, by refusing to certify same-sex couples, CSS is ruling out qualified families who are willing to provide care for children in need, can be certified, and who have roots in this community.

“… Even after intake to CSS foster care was suspended, DHS worked with CSS to approve a few children moving into CSS foster homes because it was in the best interest of those children. DHS has not ended current CSS’ foster placements, nor canceled [its] contract.”

Emilie Kao, director of the Richard and Helen DeVos Center for Religion and Civil Society at The Heritage Foundation, thinks that Philadelphia made a bad decision, because it has the second-highest rate of drug overdoses in the country for a county of its size. As a result, it forces an “rapidly increasing number of children” into the foster care system, she said.

“The best thing Philadelphia could do for these kids is to rely on qualified agencies, like Catholic Charities, ranked second-highest-performing in the city, to train and equip the generous foster families who want to open their homes,” said Kao.

Windham expects the court will rule any day now on whether to grant Catholic Social Services a temporary injunction, while the case is ongoing, that would require Philadelphia to continue to allow the charity to place children into available foster homes, she said.

If Philadelphia’s action is allowed to stand, the city would join Washington, D.C., and the states of Massachusetts and Illinois, where Catholic Charities has been forced to end its provision of adoption and foster care services on similar grounds.

“Catholic Social Services is not attempting to stand in the way of any couple attempting to become foster parents,” Windham said. “They are merely asking for the ability to refer gay couples to 29 other agencies that will address their needs.”