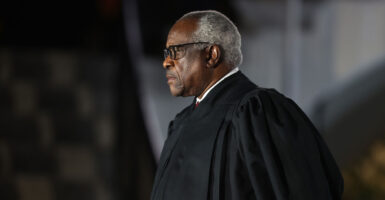 Seven other justices join Justice Clarence Thomas in his opinion determining that a request for nominal damages satisfies the Constitution's “redressability element” for standing before the court when a plaintiff’s claim is based on a violation of a legal right. (Photo: Tasos Katopodis/Getty Images)

A near-unanimous Supreme Court decided Monday that two Christian students have the right to sue the Georgia college that violated their free speech rights in the past.

The impact of the ruling is far greater than what at first sounds like a run-of-the-mill decision on a procedural issue that might prompt non-lawyers to take a nap.

The case is a significant win for the First Amendment and protection of religious speech on the campus of a public college. It portends more thoughtful administration of speech policies on campuses.

And the near unanimity of opinion by nine Supreme Court justices with vastly different ideological bents also may bode well for the high court’s future interpretations of the importance of constitutional rights.

The case, Uzuegbunam v. Preczewski, involves two former students of Georgia Gwinnett College who, while enrolled there, sought to exercise their religious liberty and publicly share their faith with other students by handing out religious literature on campus.

However, college officials decided to enforce a policy that barred students from speaking to fellow students about their Christian religious beliefs in a public square. Later, officials barred the students’ speech in a campus “free speech zone” even after the students had applied for and received the appropriate permit as requested by the school.

An analysis of the case reveals how hostile Georgia Gwinnett College was to religious speech.

After other students complained about Chike Uzuegbunam’s sharing of his faith in the school’s “free speech zone,” campus police told Uzuegbunam that his speech violated campus policy because it “disturb(ed) the peace and/or comfort” of others.

Uzuegbunam and the other student filed lawsuits seeking injunctive relief and nominal damages. After the college eventually abandoned its speech policy, the school moved to dismiss the suits as moot.

But the students pressed forward, arguing that their claims were not moot because they sought to remedy a violation of their First Amendment rights through a request for nominal damages.

In a short opinion written by Justice Clarence Thomas and joined by seven other justices, the Supreme Court ruled that a request for nominal damages satisfies Article 3’s “redressability element” necessary for standing before the court when a plaintiff’s claim is based on a past violation of a legal right.

The court specified that even a claim for small or largely symbolic damages—here, for the violation of a constitutional right—is enough for a plaintiff to sue, assuming all other elements of standing are met.

In agreeing with the former students, the court looked to forms of relief generally awarded in common law to determine whether nominal damages can redress a past injury.

Significantly, the court acknowledged that the rule allowing nominal damages for a violation of a legal right is “decisively settled” and was established specifically to prevent favoring “economic rights over important, but not easily quantifiable, nonpecuniary rights.”

During oral arguments in January, Justice Amy Coney Barrett asked the attorney for the Justice Department whether the case would have much broader implications than protecting free speech.

Specifically, Barrett asked whether the outcome of a dispute over New York City gun laws, a case that the court dismissed as moot after the city had changed its policy, would have been different if the challengers had added a claim for nominal damages for the violation of their constitutional rights.

The Justice Department attorney answered that the outcome indeed would have been different.

Chief Justice John Roberts was the lone dissenting vote, writing that the majority risked a “radical extension of judicial power.”

Roberts’ decision was unusual, not only because it was his first solo dissent since joining the court in 2005, but because of his strong language in rebuking the majority.

Roberts stressed that because the disputed speech restrictions no longer exist at Georgia Gwinnett College, and because the students had not asked for “actual damages” (monetary relief), the case no longer was a live controversy and therefore moot.

The chief justice suggested that the majority’s ruling risked forcing federal courts to “give advisory opinions whenever a plaintiff tacks on a request for a dollar.”

But Thomas countered that if the high court would recognize a dollar in economic injury for wasted bus fare in traveling to the free speech zone, it must certainly recognize a dollar for a completed violation of a constitutional right.

Holding that every violation of a right imports damage, Thomas wrote that nominal damages are sufficient to redress an injury even if that injury—like the violation of First Amendment rights—cannot be reduced to or quantified in simple economic terms.

A college’s preemptive silencing of a student’s speech—even if it later changes that policy to pump the brakes on litigation—may not be enough to keep the matter out of court.

School administrators hopefully will think twice before promulgating and implementing campus speech codes and other policies that can adversely affect their students’ constitutional rights.