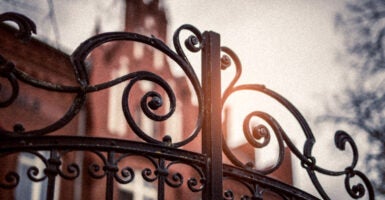 The actions of many universities make it impossible to take seriously the current definition of social justice in the academy. (Photo: FluxFactory/Getty Images)

What happens when we confuse social power with social justice? A trampling of any reasonable definition of fairness, as the fallout from an incident at Smith College in Massachusetts demonstrates.

According to reports, in the summer of 2018, a Smith student ate lunch in a campus building left empty when regular classes are not in session. An employee of said college—whose job it is to protect students from unauthorized people accessing campus—called security.

An unarmed security guard approached the student and exchanged a total of 56 words. The officer acknowledged the student was a teaching assistant and left.

Yet the undergrad, Oumou Kanoute, claimed she was “racially profiled,” and bias crusaders rushed to her aid.

The American Civil Liberties Union defended Kanoute. The New York Times said the “encounter was the latest example of a Black person encountering unwarranted police scrutiny.” The Washington Post headline read, “‘All I did was be black’: Someone called the police on a student lying on a dorm couch.”

Shortly after the incident, however, an investigation found that not only was there no evidence for discrimination on the part of security, there was no racial bias from other employees Kanoute accused. (One of the workers was not even on campus at the time the security officer talked to Kanoute). Nor was there discrimination from the janitor who called security. To its credit, the Times offered more balanced, if belated, coverage recently.

And yet Smith President Kathleen McCartney and school leaders automatically made statements about the “ongoing legacy of racism and bias” and called for “reconciliation and healing,” but not for the innocent.

If officials wanted justice, they would have made sure those people were cleared publicly and privately of wrongdoing and emphasized the importance of finding out the facts before making a judgment.

Meanwhile, the accused employees were harassed after the episode and are no longer at the college. Smith officials still required staff to undergo sensitivity training following the event.

This example is not unique, unfortunately, and bears the marks of critical theory’s grip on the minds of so many in the ivory tower.

In critical analysis, the world around us is to be deconstructed through the twisting of our experiences to encourage dismantling authority. This process assumes culture is a place inhabited only by oppressors and the oppressed, and facts are to be replaced by narratives.

Derrick Bell, Harvard law professor and a founder of critical race theory, used narrative writing to enhance his perspective that “‘objective’ truth … smuggles the privileged choice of the privileged” into the world.

The responsibility of today’s so-called social justice warriors is to connect caring for others with “outrage” and “cultivate indignation” since “injustice is everywhere,” explains theorist Angela Harris.

Once these ideas are collapsed together, the process of eclipsing justice with power is complete. We should not find truth and protect the innocent but rather assume the worst. We exercise power by making people feel guilty, knowing that guilt motivates people to follow.

Looking for other examples? How about at Princeton last year, where a faculty letter to the administration said racism continues to “thrive on its campus.” If this was true in school hiring practices or other school operations, that would violate federal law.

When the U.S. Department of Education asked the school president who said “racist assumptions … remain embedded in structures of the University itself,” to cite specific examples last fall, he did not.

President Joe Biden’s administration dropped the investigation last month, and Princeton President Christopher L. Eisgruber seemed to reverse his earlier position and said the school has an “energetic commitment to equality and inclusivity.”

If crusaders want justice, why not cite violations so that those harmed could be made whole? Instead, the vague accusations—sometimes pointed at no one in particular—are empty power plays, making accusers look righteous and anyone who disagrees appear insensitive.

The Princeton example, along with the Smith case, a Sarah Lawrence student groups’ letter claiming racism and demanding free laundry soap, Columbia students’ occupying the school library and calling to get rid of books by white authors, and on and on, make it impossible to take seriously the current definition of social justice in the academy.

Sadly, when justice is needed on campus tomorrow, those in power have already shown an inability to find it.

Originally published by Inside Sources