Does DC Mayor Have More Power Over Children Than Parents Do? Sen. Mike Lee Weighs In 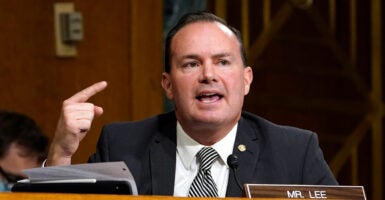 "This ... is a grave diminution and deprivation in parental rights and in the relationship between the parent and the child," says Sen. Mike Lee, R-Utah, pictured Nov. 10 during a Senate Judiciary Committee hearing. (Photo: Susan Walsh/Pool/Getty Images)

D.C. Mayor Muriel Bowser recently proposed that children as young as 11 should be able to consent to vaccinations without their parents’ knowledge. Sen. Mike Lee, R-Utah, joins “The Daily Signal Podcast” to talk about whether this is part of a larger agenda to deny parental rights and persuade children to trust government more than their parents.

Among other topics, Lee outlines his new bill designed to hold social media giants accountable for their promises.

And we cover these stories:

Sen. Mike Lee: Thank you. It’s good to be with you.

Del Guidice: You recently introduced a resolution disapproving of an order from D.C. Mayor Muriel Bowser, which basically stated that kids as young as 11 can get the COVID vaccine without their parents’ knowledge. Can you tell us about this and also what your response to it was?

Lee: Yeah. So, the District of Columbia adopted a law applicable to D.C. residents that would allow kids to give their own consent to be vaccinated starting at the age of 11.

Now, look, I want to make very clear upfront I believe in vaccinations. I’ve had my own children vaccinated. But I believe that this choice is something that should be made by parents and not by the government.

Not everybody shares my view about vaccines and there’s nothing more fundamental and more sacred … than a parent’s right to have to be the one who gives consent, or withholds consent, for particular medical treatment—particularly, invasive medical treatment, like a vaccine.

Article 1, Section 8, Clause 17 of the Constitution, so-called the Enclave Clause, makes us the ultimate lawmaker over D.C. We’ve delegated out that authority to D.C.’s city government, but we retain the power to undo any of those pieces of legislation.

We’ve got a process by which we can do it. I’m running a resolution to undo this resolution. I think this is a choice that belongs to the parents, not to the government.

Del Guidice: On that note, can we talk a little bit about, do you think there’s a larger agenda here to start removing parental rights and have children be more trusting of the state than even their parents?

Lee: You have seized upon the exact concern I have, Rachel, which is that if we do this here, where does that lead? Well, we know where it leads. The minute you start to say that the government is itself the custodian, the government is the ultimate parent, that inevitably leads to other things.

Now, this in and of itself is a grave diminution and a deprivation in parental rights and in the relationship between the parent and the child. But it could also lead to other bad things, and that’s very concerning to me.

Del Guidice: You recently introduced a bill called the PROMISE Act, and this bill is really designed to hold big tech companies accountable for their promises. Can you start off by just telling us about the bill?

Lee: Sure. In the PROMISE Act, I proposed giving authority to the Federal Trade Commission to go after big tech companies for lying to the public, to lying to consumers, to lying to people who, for example, use a particular social media platform, let’s just say.

When they offer up terms of service in which they promise, either expressly through their policies or through statements made by their CEOs, when they’re told, for example, “Come onto this site and agree to our terms, and if you do, we will not discriminate on the basis of your political ideology or your views on proper treatment of COVID, or this or that. We’re going to at least treat you evenhandedly as a political matter.”

I think that has happened. We’ve had hearing after hearing with people from Facebook and Twitter, and by people, I mean their CEOs, in which we’ve raised this issue, and in which I’ve raised concerns like that.

The CEOs of those companies inevitably tell me something like the following: “Well, it’s OK because we’ve got some Democrats mad at us and some Republicans mad at us, must mean we’re doing something right.”

That’s an indication, notwithstanding the fact that they, themselves, the CEOs of these companies, have repeatedly said, “Yeah, we don’t put our thumb on the political scale. We don’t favor or disfavor one political ideology over another.” It’s not true. They need to stand accountable for that.

Del Guidice: Well, bigger picture here, what do you see happening if Big Tech isn’t held accountable? I mean, what lies down the road as people continue to not address this?

Now, there’s some tension here because on the one hand, if somebody wants to start a company, they want to be liberal activists, they’ve got every right to do that. I don’t want the government interfering with that in and of itself. But there’s a limit to that. Meaning, if you’re defrauding people in the process, that’s a problem. That’s a place where the government can, may, and, I believe, must step in.

Del Guidice: You’ve been vocal on Twitter recently about how there’s been a consistent trend over the past 80 years with both parties really taking the power away from the American people. Can you talk about why this is a problem and what you think the solution is?

Lee: I’m so glad you asked about this. Look, the twin structural protections of the Constitution are as important as any other feature in it.

What I refer to is the vertical protection of federalism keeps most of the power, or it’s supposed to, rather, at the state and local level. It’s not because state, local governments are always better, but they’re closer to the people. They’re easier to hold accountable to the people.

Our Founding Fathers wisely entrusted most powers of government to states and localities, reserving just a few powers at the top, at the federal government—weights and measures, trademarks, copyrights and patents, declaring war, granting letters of mark and reprisal, regulating trade or commerce between the states with foreign nations and with the Indian tribes, coining money, regulating the value thereof, and there are a few basic others, but you get the idea. Everything else is supposed to be left to the states.

As we move power from the states to Washington, we’ve also seen a trend where Congress, uncomfortable with its newfound power and newfound accountability, seeks to avoid that accountability by handing it over to the executive branch, usually to unelected, unaccountable bureaucrats.

You’ve always got somebody else to blame there. Thus, power has been taken away from the American people in two steps. First, from the people to Washington. Within Washington, from the people’s elected lawmakers to unelected, unaccountable bureaucrats. That is bad.

Del Guidice: So what’s the way forward? How would you suggest remedying this?

One of the first steps that I would like to see is the passage of reforms like the REINS Act, [REINS] stands for Regulations from the Executive in Need of Scrutiny.

It says that these big federal regulations put in place by executive branch bureaucrats can’t take effect without Congress affirmatively passing it into law, and the president ultimately having the power to sign or veto the legislation, saying this major rule issued by [the Environmental Protection Agency] or [the Occupational Safety and Health Administration] or whatever alphabet soup agency you’re talking about.

If Congress had to affirmatively enact those things, and all of a sudden you’d have members of Congress being held accountable for those laws, that would start the restoration of separation of powers. So too with the Global Trade Accountability Act, which is something I introduced to do for trade policy what the REINS Act does for regulatory policy.

Little by little, as you see members of Congress having to be held accountable for these things—because they’ll have to take their own votes to have them kick in—you will eventually see, and you mark my words, members of Congress also saying, “Hey, wait, maybe we don’t need to exercise all this power in all these areas.”

Local activities that take place in one state at one time—like mining, agriculture, manufacturing, labor, things like that—should eventually be returned to the states for state regulation, and they will be, if you make Congress actually responsible for passing the laws.

These are baby steps, and they may sound indirectly related to it, but they are the absolute keystone to the whole thing. If we can start restoring separation of powers, we’ll restore federalism, and the opposite is also true.

Del Guidice: Well, House Democrats just passed their Equality Act, which, there’s a lot to this bill, but it’s going to allow biological men in women’s restrooms, boys being able to disrobe in girls’ locker rooms. What is your perspective of the Equality Act? … Is there anything that can be done to counter it?

Lee: My problem with the Equality Act is that it utilizes language upfront. The Equality Act, who can be against equality? And it also uses a cause that I think a very overwhelming majority of Americans would agree with, which is, let’s make sure that equal rights are accorded to LGBT persons.

But when you dig into the details and you see some of the ramifications of this, you can see that it’s not well-crafted and it’s crafted in such a way that’s going to really harm a lot of people.

Our rights are such that they should be things that can be accorded and protected fairly and evenhandedly, and giving someone a right here shouldn’t necessarily deprive a broad other group of people of a corresponding right.

There are also significant religious freedom implications of it. And by its own terms, it repeals significant swaths of the Religious Freedom Restoration Act.

And look, it is great to protect all Americans, including LGBT persons. This is not a well-written piece of legislation. It’s bad and it needs to be voted down. I hope that it will [be].

Del Guidice: Sen. Lee, thank you so much for joining us again on “The Daily Signal Podcast.” It’s great having you with us.

Lee: Thank you very much.