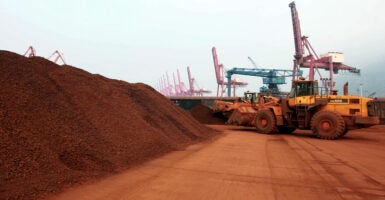 Rare earth elements are used in a wide range of items used by the military, including communications equipment, precision-guided weapons, night-vision goggles, and stealth technology. Pictured: A front loader shifts soil containing rare earth minerals to be loaded at a port in Lianyungang, China, for export to Japan Sept. 5, 2010. (Photo: STR/Agence France-Presse/Getty Images)

For one-third of the price of one F-35 Lightning II, the Pentagon made a key investment to ensure its supply of rare earth elements.

The Department of Defense earlier this month announced that Lynas USA LLC was awarded a $30.4 million technology investment agreement under Title III of the Defense Production Act.

With that award, Lynas will construct and begin operating a light rare earth elements processing facility in Hondo, Texas.

The recent announcement from the Pentagon serves as an important milestone and reminder of the ground gained—and left to be won—in the effort to secure a reliable rare earths supply chain for the U.S. defense industry.

Few Americans could name even one of the 17 arcane rare earth elements. According to the American Geosciences Institute, those substances are components to more than 200 products, such as cellphones, flat-screen monitors, lasers, and sonar systems.

With wide-ranging applications, materials like cerium, lanthanum, and samarium may be found in everyday commercial products.

More importantly to the Pentagon, they are also vital components of defense systems key to American military supremacy. Rare earth elements are used in a wide range of items: communications equipment, precision-guided weapons, night-vision goggles, and stealth technology, to name a few.

The many uses of rare earth elements raise an important question: Can the U.S. military and its partners depend on the supply chains for these materials?

Despite promising changes in the industry, the answer today is still complicated.

The risk to the Defense Department’s rare earth elements supply chain is not due to a lack of the minerals themselves. While their name implies that producing refined rare earths requires a lucky deposit on domestic soil, unrefined caches of rare earths exist abundantly in several places around the world, including the U.S.

Mining and processing facilities for these rare earth elements, however, are not as easy to find outside of China. The Rand Corp. describes the key issues with rare earths as “less about the materials themselves and more about where the materials are produced and processed.”

Today, an estimated 85% of the global rare earth oxide supply is produced in China. Historically, because of market domination, individual producers of specific materials, such as China and Chile, can temporarily sway market prices, causing disruption that free markets eventually correct, but not without doing damage to time-sensitive defense programs.

In the past, China has attempted to use its dominance in this sector for geopolitical gain. During a flash in tensions over the disputed Senkaku Islands in 2010, China unofficially imposed rare earth elements export limits against Japan.

That caused the price of rare earths to surge from $9,461 per metric ton in 2009 to a stunning $66,957 per metric ton in 2011. In response to that supply shock, other countries established rare earth elements processing capabilities, the market eventually rebalanced, and China lifted its export controls by 2015.

That incident demonstrated that free markets correct distortions in the rare earth elements sector, as they would any other sector. But defense programs cannot afford the disruption that comes with market realignment.

Developing capacity and capability in rare earth elements mining and processing takes years, and programs like the F-35 and the Virginia-class submarine (which requires a whopping 9,200 pounds of rare earth materials) are too vital to our national defense to wait that long.

Pentagon and Department of Energy grants have invested in processors and producers setting up shop in Texas and reopening the U.S.’ primary rare earth elements mine in Mountain Pass, California.

Even with the U.S. mining ores again, without beginning domestic processing, unrefined material must be processed overseas and is primarily processed in China.

In the past, companies such the Colorado-based Molycorp have unsuccessfully tangled with meeting high standards in rare earth elements production. Reconciling environmental regulations with the vulnerable state of that supply chain will be a continuing issue.

The Pentagon’s recent announcement on the Lynas award should remind policymakers that, in the rare earth elements sector, there is a limited but vital role for government to play in ensuring defense programs have access to the materials they need, including (and especially) in moments of geopolitical crisis.

Government investment made in the sector, including two grants issued from the Department of Energy and the Department of Defense in the past year, will help to create the supply security that in turn promotes our national security.

The global commercial market for rare earths has weathered geopolitical storms in recent years, and it can do so again, without government intervention.

But the public investment made in rare earth elements—small relative to the Defense Department’s annual budget—will have a big impact in ensuring the warfighter is equipped to defend the U.S., its allies, and its interests in the midst of such storms.