Liberals Claim to Support Independent Agencies. So Why Is Biden Firing Trump Appointees? 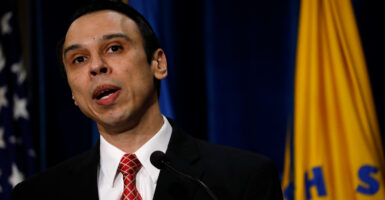 Roger Severino—seen here in January 2018, when he was director of the Office for Civil Rights at the Department of Health and Human Services in the Trump administration—is litigating his ouster from an unrelated post by President Joe Biden. (Photo: Aaron Bernstein/Getty Images)

That is often referred to as the unitary executive theory, and has been, at least until now, derided by most liberals—and often grossly mischaracterized, as in this excerpt from the movie “Vice” (warning: contains profanity):

Relying on the language of Article II and agreeing with sentiments expressed by Alexander Hamilton in Federalist No. 70—“Energy in the Executive is a leading character in the definition of good government”—most conservatives think that an independent executive branch agency is an oxymoron.

Conservatives believe that under the Constitution, a president can remove for any reason any political appointee who is involved in the execution of the law or who assists in any other constitutional function under Article II, even if he ends up paying a political price for doing so.

Although not fond of those rulings, conservative presidents have abided by them. One would have thought that liberal presidents would, too—until now.

Since taking office, and to the delight of liberals, Biden has fired several of former President Donald Trump’s executive branch appointees, including Peter Robb and my former colleague Roger Severino, before their terms had expired and without cause.

On Biden’s first day in office, he sent a letter to Robb, the general counsel of the National Labor Relations Board, an independent agency, informing Robb that if he did not resign immediately, he would be fired. Robb, whose term wasn’t to expire until Nov. 16, 2021, refused to do so and was terminated.

Four Republican senators have sent a letter to Biden, objecting to Robb’s termination. Although Robb has not (yet) filed a lawsuit challenging his termination, others have filed motions challenging the authority of Robb’s replacement to act.

On Feb. 2, Severino, who had served as the director of the Department of Health and Human Services’ Office for Civil Rights for most of Trump’s term, received a similar letter, demanding that he resign immediately from the Council of the Administrative Conference of the United States, also an independent agency.

Severino—who was first appointed as a member of the council in August 2020 and had received his commission reappointing him to a full three-year term two weeks beforehand, refused and was fired.

He has responded by filing a lawsuit challenging the validity of his termination.

In fact, since the National Labor Relations Board general counsel position was created in 1947 as part of the Taft-Hartley Act, no president has fired a sitting appointee to that position before his term expired—until now.

Back in 1987, then-Sen. Joe Biden was a strong supporter of the reauthorization of the Ethics in Government Act, which created independent counsels, even though conservatives argued that the act violated separation of powers principles by impinging on the president’s Article II authority.

Perhaps Biden’s recent actions indicate that his own views and the views of other liberals about the unitary executive theory and the need for a strong executive when it comes to the exercise of presidential authority, including his removal power, have evolved.

Recently, in Seila Law v. Consumer Financial Protection Bureau (2020), the Supreme Court distinguished its past precedents and struck down as a violation of the separation of powers principle a statutory limitation on the president’s ability to fire the director of the CFPB without cause.

Perhaps the courts will rule in Biden’s favor by continuing to limit these precedents and restoring the president’s authority to remove political appointees even from so-called independent executive branch agencies.

While that would be bad news for Robb and Severino, it would be good news for those who support the unitary executive theory and a robust separation of powers among the three branches of the federal government.

But if not, then Biden should reverse course, rescind those terminations, and just wait—as many past presidents of both political parties have done—to fill those positions when the terms of those appointees expire.

Win or lose, the ground rules should be the same for everyone.