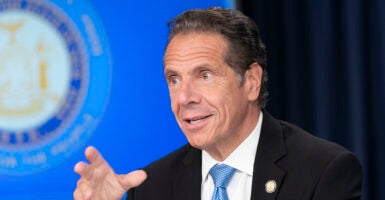 The media’s deep arrogance about the Democrats’ superior standing as the Party of Science and Competent Government when it comes to the coronavirus is personified in New York Gov. Andrew Cuomo. He has been hailed for many months as a wonderful role model, an inspiring anti-Trump.

Somehow, each and every tragic coronavirus death was laid at former President Donald Trump’s doorstep, ignoring the fact that New York is second in total coronavirus deaths (behind California) and second in deaths per million residents (behind New Jersey).

Back in May, NBC’s Cynthia McFadden stood out for focusing on Cuomo’s coronavirus response, stating, “Connecticut Gov. Ned Lamont thinks forcing nursing homes to take COVID positive patients, as most states are doing, is a path to disaster.” Obviously, it was. But the praise kept flowing.

In October, Cuomo came out with a book titled “American Crisis: Leadership Lessons from the COVID-19 Pandemic.” He was hailed in a series of book interviews, and the media added dust-cover blurbs.

MSNBC’s Lawrence O’Donnell wrote, “It is a book unlike anything ever written by a governor before because no one has lived through and managed the crisis that he has.”

Entertainment Weekly overflowed with praise, saying, “The hero that America never realized it needed until he was on our television screens every night … has taken his talents to the page.” (It added on its website, “One can only assume a sequel is expected once the pandemic is actually over.”)

In November, he was given an Emmy for his “masterful use of television” during the pandemic. Celebrities were brought in to pay gushing tribute.

But in January, the Democratic attorney general of New York, Letitia James, issued a report suggesting that the coronavirus-related death toll in the state’s nursing homes might be more than 50% higher than Team Cuomo claimed, because the team didn’t reveal how many nursing home residents died in hospitals. NBC covered it. ABC and CBS passed.

On Feb. 12, the New York Post reported that top Cuomo aide Melissa DeRosa admitted to lawmakers on a private call that the team underreported the number of patients placed in nursing homes by 40%. “[W]e froze,” she said. “We weren’t sure if … what we start saying was going to be used against us.”

Again, network coverage that night was less than intense: 26 seconds on ABC, 31 seconds on CBS, and 17 seconds on NBC. The next morning, NBC’s “Today” show at least offered a full report totaling 3 minutes and 7 seconds.

As the Trump impeachment faded and the outrage grew in New York, the TV coverage began to grow, at least in some places. At this writing, ABC is apparently still bored out of its mind.

All this hiding of the truth by Team Cuomo should be deeply embarrassing to the shameless pro-Cuomo press. The Media Research Center organized clips of the press contrasting Cuomo and Trump in 2020:

David Remnick of The New Yorker to Brian Stelter on CNN: “Truth versus mendacity.”

MSNBC’s Chris Hayes: “Cuomo is clearly living in a totally different reality—the actual one?!—than the president of the United States.”

NBC’s Lester Holt, speaking to Cuomo in an interview as if Cuomo were the Churchill of the coronavirus pandemic: “You spoke to National Guard troops today in a stirring speech that, if I wasn’t listening carefully, I thought you were sending soldiers off to war.”

Stelter announced on “Reliable Sources”: “This has been a remarkable show of leadership by Gov. Cuomo in recent days. He’s providing hope, but not false hope.”

Since Cuomo’s mendacity was exposed, Stelter has spent zero seconds discussing it on his Sunday show. Now who deserves the “Facts First” motto?