China Is More Dependent on U.S. And Our Technology Than Most Think

China Is More Dependent on U.S. And Our Technology Than Most Think 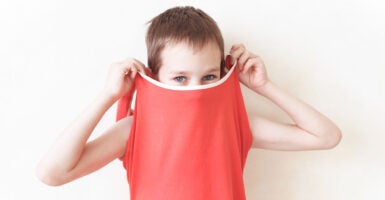 Children “have been very seriously damaged” in receiving treatment at the United Kingdom’s premier gender identity facility, a former psychiatrist there says in a bombshell interview.

After working with Tavistock and Portman for 24 years as a consultant psychiatrist, Bell recently retired. In the interview with London-based Channel 4 News, he speaks openly about his observations about giving children puberty blockers, treating every girl with a gender or sexual issue as “conversion therapy,” and politicizing support for transgender children.

Right away, Bell isn’t shy about relating the concerns of parents and others about Tavistock’s treatment plans. He tells reporter Cathy Newman:

I was a representative of the clinical and academic staff. The concerns that were brought to me were very, very serious. The main concerns were issues that had to do with … lack of consent. Many of the people who spoke to me did not think their children were able to consent to the treatment.

Then there were concerns of children being inappropriately pushed through to transition, where they had a lot of complex problems that really needed thinking about. The whole attitude of what’s called ‘affirmation’ instead of neutrality and inquiry caused considerable damage to the capacity of the service and clinicians to take on the full complexities of the cases they were dealing with. As a result, children have been very seriously damaged.

Newman asks the psychiatrist in the interview whether children are at risk while receiving treatments at Tavistock.

In December, a panel of three judges on the High Court of Justice issued a landmark ruling restricting Tavistock from issuing puberty blockers to children under 16. The High Court is one of the U.K.’s three senior courts under its Supreme Court.

The judges made their decision in part because of the testimony of Keira Bell, who is known in the U.K. for speaking out against the use of puberty blockers, which Tavistock prescribed to her when she wanted to become a male.

Channel 4’s Newman asks Bell about the High Court ruling in that case regarding kids under 16.

The psychiatrist calls the decision “really important because it acts to protect them.”

Bell later says that the “positioning of these girls as only having a gender problem acts to prevent them from developing in a normal way and their own nonconforming gender identity or sexuality” and adds: “This is a form of conversion therapy among people that are gay or lesbian.”

Newman asks Bell whether he “might be on the wrong side of history” in failing to be as vocally supportive of the transgender movement as one might expect from someone who worked at a gender clinic for decades.

He appears to have no qualms about tying the gender debate to politics, saying later that “one of the things gone terribly wrong in the Tavistock and elsewhere is the invasion of the clinical domain by the political ideology.”

Bell articulates the very phenomenon that has grown in the United States as well:

This is a very highly politicized area. And leaders from movements with a very powerful ideological commitment have managed to capture policy both medically, professionally, in the media, and in government with no evidence basis, a purely highly politicized movement; we just have these consequences.

All I’m saying … is [the children] need to wait. There needs to be a thoughtful engagement with them as opposed to motoring them through to treatment pathways that have irreversible consequences for their bodies. We’re talking about not doing harm to children.

Bell is at his most compelling when he discusses a real-life example of someone who is struggling with her sexuality.

“Let me put it very simply. A girl of 12 may find that she is sexually attracted to other girls,” Bell says, adding:

It may go through her mind: … Maybe I’m not a girl. Maybe I’m a boy. If that happened 10-15 years ago, that would have been a passing phase and things would have moved on. But now because of hugely changed cultural context and the penetration of social media, such a girl may go online and she may easily come to the belief … that she is a boy. And that having reached that [conclusion] … there will be lots of forces around her that will support it, and all her other difficulties will be repositioned through that prism.

Although Bell says he doesn’t believe that Tavistock tried to push him toward retirement or “hound him out,” he says the facility made it clear “that people like me that spoke out will come under the scrutiny in this very negative way.”

“I think it’s like a message to everyone else who don’t have my seniority, my safety: Oh, my God, I better not speak out, they’ll think I’m transphobic.”

Bell’s comments during this interview confirm that the High Court made the right decision when it ruled that Tavistock must stop giving puberty blockers to children under 16.

The psychiatrist’s articulations about gender ideology as a political movement, whether in the U.K. or the United States, are spot on. He was courageous to speak out on an issue that has become so controversial in such a short time.