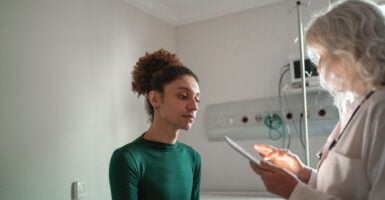 A High Court in the U.K. issued a landmark judgment this week that will protect children 16 years of age and younger from receiving potentially harmful hormone replacement therapy. (Photo: FG Trade/Getty Images)

This article has been corrected to reflect that the U.K. panel of judges have ruled that children 16 and under are unable to give informed consent to hormone replacement therapies and that for children 16 and 17, medical professionals may wish to involve the courts. It has been updated to reflect that the judges ruled that children under 16 are unable to give informed consent to puberty blockers. The language about Keira Bell’s testimony and Rep. LaMalfa’s bill has been updated to clarify the nature of Bell’s testimony and the scope of LaMalfa’s legislation.

A High Court in the U.K. issued a landmark judgment this week that will protect children under 16 years of age and younger from receiving potentially harmful puberty blockers.

The High Court ruled that treatments often used to aid gender “transitions”—like puberty blockers—are too experimental and are no longer able to be administered to anyone younger than 16 without permission from the court.

This is an incredible ruling for those who have been spreading the word for years about the dangers of transitioning.

The ruling against Tavistock and Portman NHS Trust, which operates the U.K.’s sole “gender-identity development service,” is a good sign that the U.K. is finally waking up to the harm puberty blockers do to young people. The judges made their decision due to a number of factors, including the testimony of one of the claimants in the case, Keira Bell.

Bell was referred to Tavistock and Portman NHS Trust and prescribed puberty blockers at age 16. Now 23, Bell, who received puberty blockers, hormone replacement therapy, and a mastectomy, testified in October that about her regrets about her transition. A mother of a 16-year-old girl with autism who had been waiting for gender dysphoria treatment was also a claimant in the lawsuit.

The court also ruled that clinicians may need to involve the court in potential cases where the clinic is unsure if it is appropriate for a 16- or 17-year-old to receive puberty blockers.

In a statement, Tavistock and Portman NHS Trust said they were “disappointed” and “that the outcome is likely to cause anxiety for patients and their families.

A group called Transgender Trend, which tracks transgender-related news, intervened in this case and, in a post, said the judgement “reflected some of the concerns we raised.”

In our intervention, we submitted evidence that the [gender identity development service] operates within a core illogicality: a belief that biological sex is irrelevant to being a boy or being a girl, while providing a service that is predicated on the existence of, and ability to define, a ‘boy body’ and a ‘girl body’ that children might move between through medication and subsequent surgery. This is of course an impossibility, but it is an outcome that children are led to believe is possible.

Bell’s lawyer made a strong case to the High Court in October that children and teenagers were unable to understand the effects of hormone replacement therapy, and said clinics should only be able to prescribe said therapy with a court order due to the “lifelong medical, psychological, and emotional implications” of taking the treatment.

In an email, Ryan Anderson, the William E. Simon senior research fellow at The Heritage Foundation and author of “When Harry Became Sally: Responding to the Transgender Movement,” praised the High Court’s decision, saying:

Children who suffer from gender dysphoria deserve real therapy aimed at helping them feel comfortable with their own bodies. Adults should never encourage a child to reject their body, nor interfere with their natural pubertal development. Blocking puberty and administering cross-sex hormones to a minor is not only an experimental set of medical procedures but is a profound violation of medical ethics. American courts and legislators should follow the U.K.’s lead and prohibit these unethical experimental procedures from being performed on minors.

This is an incredible ruling in a controversial case many lawmakers in the U.S. have been following. In fact, informed and motivated by Bell’s story, Rep. Doug LaMalfa, R-Calif., introduced legislation in August that would prohibit “gender reassignment interventions” from being performed on minors in this country.

The existence of HR 8012, as a result of Bell’s powerful story, is an important move forward in the United States’ ability to protect children from being forced to take puberty blockers or other hormones without proper education and that may have irreversible effects and produce irreparable harm.

For years, the U.K. has been zealously embracing transgender ideology while demonstrating a laissez-faire attitude toward the harmful effects of puberty blockers. This ruling puts the brakes on that hazardous approach and protects children and their bodies.