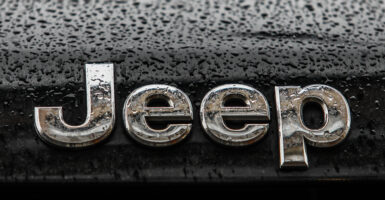 "What Jeep wants everyone to believe is that now that Democrats control the federal government and have jerked the wheel to the left, everything's going to be OK, because the cultural elites agree with it," Tony Perkins writes. (Photo: Jakub Porzycki/NurPhoto via Getty Images)

Unfortunately for football fans, the political ads didn’t end when the election did.

The millions of people who tuned into Super Bowl LV found that out the hard way, thanks to companies like Jeep—who tried to sell cars with condescending ads that tell the 74 million Americans who didn’t vote for Joe Biden that the country’s in much better shape, because liberals always know better.

Most people tuning into the game were probably hoping for an escape from the country’s tensions. Instead they got a sermon from left-wing activists like Bruce Springsteen, who’s decided that unity has magically been achieved now that Democrats are in power.

The commercial, called “The Middle,” kicks off with a Kansas chapel that sits in the exact center of the country. “It never closes,” the voice of Springsteen tells us. “All are more than welcome to come meet here in the middle. It’s no secret that the middle has been a hard place to get to lately between red and blue, between servant and citizen, between our freedom and our fear.”

He tells us, amid waving flags, that freedom “belongs to us all,” and “We need the middle”—a case that would have been a lot more convincing had Springsteen himself not called for an “exorcism” in the capital last fall to get rid of the conservative “bums.”

Suddenly, the idea that “we stand on common ground” rings a little hollow. As does his insistence that the country has magically become the “ReUnited States of America” under three weeks of a radical Biden.

Critics of the ad, which seemed to be everyone from The Washington Post to Mollie Hemingway, called the two-minute exercise patronizing, “particularly obnoxious, and tone deaf.”

“Being preached to by someone who doesn’t respect my views,” one Twitter user posted, “who relishes in suppressing them, having the nerve to pretend to be ‘my community’ and declare unity. They have no idea how transparently cynical the whole thing came across.”

And who on Earth, Hemingway wanted to know, would say the country is reunited now?

Biden won an election that came down to about 40,000 votes in three states, she pointed out. Then, despite the media’s insistence that he’s a “unifier,” Biden set to work signing a slew of far-left executive orders and pursuing major COVID policy without the support of a single Republican member. If that’s the reunited states of America, you could have fooled us.

What Jeep wants everyone to believe is that now that Democrats control the federal government and have jerked the wheel to the left, everything’s going to be OK, because the cultural elites agree with it.

In other words, when Republicans “win a national election, that’s divisive—but when Democrats win one, [it’s] unifying,” Hemingway shakes her head.

Give us a break. Most Americans can see right through this musician’s kumbaya after sitting through years of his conservative name-calling. They despised Donald Trump, sure. But in the end, he was just a convenient cover for the left’s hatred of the conservative, pro-family, pro-life, pro-religious liberty policies the 45th president represented.

For proof, check out The Washington Post’s review of the ad. It’s not mad because the New Jersey rocker is talking down to half of America. It’s mad that he’s suggesting unity without making conservatives pay for their sins first:

Despite the healing sound of his voice, Springsteen is ultimately preaching reconciliation without reckoning—which after January’s Capitol siege is no longer an acceptable path toward progress … Suggesting that we should all swiftly and metaphorically travel to the nucleus of White, rural America to make up and move along feels insulting and wrong.

Bruce Springsteen is a hard-core liberal ideologue. “For a celebrity so identified with one party to go to the other side’s turf after his side has won the election and call for unity is not really an effective tactic,” National Review Online’s Dan McLaughlin agreed. “People see it for what it is: We won, now get together behind us.”

That’s the kind of hard-line extremism that got America into this mess. It certainly won’t get us out.