With Super Bowl, Tampa Braces for Surge in Sex Trafficking. Here’s How It’s Combating It. 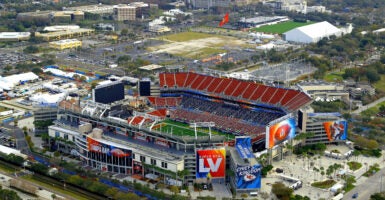 Raymond James Stadium in Tampa, Florida, is set to host Super Bowl LV on Feb. 7. On the dark side, the big game is expected to bring increased sex trafficking to the Tampa Bay area. (Photo: Mike Ehrmann/Getty Images)

Expect human traffickers to exploit the Super Bowl in Tampa, Florida, this weekend.

While current COVID-19 restrictions will limit game attendance, there will still be 22,000 fans there, and with Tampa as the home city of the Buccaneers, one of the participating teams, there will be many more in town.

Traffickers are criminal economic enterprises who target the Super Bowl and other large-scale events to take advantage of the increased concentration of men, money, and parties in one geographic area.

Traffickers travel from all over the country and even internationally to bring in their victims for the event.

Most human traffickers are low-level operators, selling one, or maybe two, victims. They can make a lot of money by selling the victim over and over again.

At last year’s Super Bowl in Miami, police made 47 arrests, which led to the rescue of 22 victims. Additionally, eight buyers of sex trafficking and 34 accomplices were arrested.

The New York Daily News has called Tampa the “strip club capital” of the country. And with publicly advertised events like the “Stripper Bowl” taking place after the game (as it has the last few Super Bowls), there is certain to be increased sex trafficking.

Trafficking at large-scale events used to take place primarily at hotels and motels, but in recent years it has evolved to rental properties, time shares, Airbnb rentals, and even yachts. The vast and sprawling nature of these low-level trafficking enterprises can make the job of law enforcement combating it increasingly difficult.

On the demand side of the equation, would-be buyers also flock to the Super Bowl city, knowing there will be an abundant supply of sex for sale. They find their victims through the dark web or any of the numerous websites that advertise victims on the open internet.

A study of the 2014 Super Bowl found no less than 38 different websites advertising victims who showed indications of being a juvenile. That number has likely only increased.

The sheer volume of online ads in general, and especially around the Super Bowl, exceeds the capacity of any one law enforcement agency to respond at a level that would deter traffickers from coming to its jurisdiction.

Combating trafficking at large-scale events like the Super Bowl, therefore, requires significant advanced preparation. The host city’s law enforcement agencies spend 18 to 24 months preparing and will normally send a team to the Super Bowl city of the year before to observe.

This past July and August, the association brought its law enforcement experts from past Super Bowls in Atlanta, Minneapolis, and Miami to Tampa to share best practices and lessons learned.

And the local agencies in Tampa already have been targeting trafficking leading up to the big game. In January, the Hillsborough County Sheriff’s Office arrested 71 men for soliciting sex in “Operation Interception.”

In addition to preparation, another key component to combat trafficking is personnel. Trafficking is a personnel-intensive crime to fight. To recover a single victim, an entire multidisciplinary team is needed to carry out the operation, collect the evidence, conduct interviews, and provide care. With an increased number of victims in the area, the host city needs to have numerous teams in place to respond.

Tampa is fortunate to already have additional resources to draw on in the area. Florida Attorney General Ashley Moody has made combating human trafficking a priority in the state. There are both local human trafficking task forces and a regional task force funded by the U.S. Justice Department in the Tampa area. Cross-jurisdictional task forces like these, with municipal, county, state, and federal law enforcement, are a highly effective model.

Nonprofits, such as the International Association of Human Trafficking Investigators and the National Center on Missing and Exploited Children, also serve as force multipliers to the agencies, bringing teams of investigators and crime analysts to support the sharing of information, development of leads, and identification of potential victims in the days and weeks leading up to the Super Bowl.

With all the personnel involved, successful coordination is paramount. The host city agency normally operates a local tip line and command center to funnel incoming leads and coordinate operations.

But by far the most important component for combating human trafficking is public awareness.

As trafficking spreads beyond hotels and motels to time shares and Airbnb rentals, help from the broader community is more needed than ever. That is why Moody recently partnered with Uber to teach thousands of drivers how to spot and report human trafficking while picking up passengers.

Awareness campaigns like “It’s a Penalty” with NFL athletes also educate the public on how to report trafficking around the Super Bowl and have partnered with Tampa’s airport as well to post advertisements. Those efforts help the public learn how to identify trafficking and report it to law enforcement.

Human trafficking is not unique to the Super Bowl and its host city, however. It’s happening in every community, year-round. If you see something, report it. Call the National Human Trafficking Hotline at 1-888-373-7888 if you ever suspect trafficking and let law enforcement investigate and make the determination.