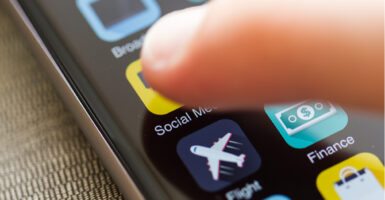 Political leaders in Florida are taking steps to rein in the power of major technology companies.

Florida Gov. Ron DeSantis and several of his state’s Republican legislative leaders this week announced legislation that would prevent Twitter, Facebook (and its subsidiary Instagram), Google, Amazon, and Apple from censoring content or selling users’ data in the Sunshine State.

What were once small, upstart companies now are controlling the flow of information across the world, the Republican governor said.

“As these companies have grown and their influence expanded, Big Tech has come to look more like Big Brother with each passing day,” DeSantis said.

A decisive shift within the technology giants occurred as they went from being neutral platforms that allowed the free flow of information and ideas to becoming  “enforcers of preferred narratives,” DeSantis said.

The central issue, the governor said, comes down to one question: “Are consumers going to have the choice to consume the information they choose or are oligarchs in Silicon Valley going to make those choices for us?”

It is encouraging to hear DeSantis say, in effect, “we need to look for solutions that focus on protecting the rights and choices of consumers,” James Jay Carafano, a Heritage Foundation vice president who oversees the leading think tank’s Center for Technology Policy, told The Daily Signal in an email, adding:

As Heritage President Kay C. James rightly stated, ‘Americans have legitimate concerns about the role of Big Tech in shaping and influencing political speech. Time and again, social media companies have squandered the public’s trust and don’t deserve the benefit of the doubt.’

Under the legislation, Floridians have an avenue for recourse if social media companies violate its tenets.

“These provisions are of no use without enforcement,” DeSantis said. “We will provide recourse for Floridians both by enabling a user to bring a cause of action against a technology company for violating these requirements of Florida law and empowering the [state] attorney general to bring action against the technology company for violations of these requirements under Florida’s Unfair and Deceptive Trade Practices Act.”

If a tech giant “deplatforms” a candidate for public office, the company would be subject to a fine of $100,000 a day until it restores access to the candidate. And if a company uses algorithms to “suppress or prioritize the access of any content related to a political candidate or cause on the ballot,” the governor said, “that company will also face daily fines.”

Under the legislation, a tech company that chooses to promote one political candidate over another would be required to record that action as a campaign contribution with the Florida Elections Commission.

A representative of Twitter responded by saying that the social media platform does not have a comment on the governor’s proposal but is committed to giving users “choices about the key algorithms that affect their experience online” and described steps that Twitter has taken to do so.

“Governor DeSantis reminds [us] that federalism is no outdated concept,” Heritage’s Carafano told The Daily Signal. “States remain our great laboratories of democracy. They too have responsibilities to look after the freedom, safety, and prosperity of Americans and it is constructive to see states considering their appropriate role in looking out for citizens online.”

Beyond efforts at the state level, Congress also must work to limit the power of large technology companies, Lora Ries, senior research fellow in Heritage’s Center for Technology Policy, told The Daily Signal.

“Congress should refine Section 230 of the Communications Decency Act to ensure that markets and civil discourse remain free and fair,” Ries said in an email.

Section 230 protects social media platforms from being held to the same legal standards as publishers such as newspapers. However, calls to mend Section 230 have increased as companies such as Facebook and Twitter engaged in content management.

In an interview Tuesday evening on Fox News Channel’s “Tucker Carlson Tonight,” DeSantis discussed Florida’s effort to crack down on Facebook and the others.

“A lot of us have thought there was something wrong for a long time,” DeSantis said. “But to sit back and hope it gets better, that clearly wasn’t going to work. So we’re leading, and I think it will be good.”