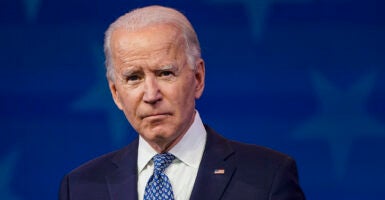 The $1.9 trillion relief bill that President Joe Biden wants Congress to pass now as his response to the COVID-19 pandemic would cost Americans more than the entire federal government cost in fiscal 1981.

That year, according to the historical budget numbers that Biden’s own Office of Management and Budget has published on the White House website, the federal government spent approximately $678,241,000,000.

When that is adjusted for inflation from September 1981 dollars into December 2020 dollars (using the Bureau of Labor Statistics inflation calculator), it equals $1.895 trillion.

If, sometime in the next two months, Congress were to approve the total $1.9 trillion in COVID-19 spending that Biden is now requesting, total federal spending in response to COVID-19 approved over the past calendar year would hit $5.1 trillion.

That would be more money than the federal government spent on all of its activities in any fiscal year until last year.

Did you get $20,159 worth of COVID-19 relief and protection from the federal government? Do you think you will get $32,129 worth if Biden gets to spend his additional $1.9 trillion?

To be sure, some of the things Biden is suggesting in his COVID-19 relief plan make sense.

“The package includes more than $400 billion to combat the pandemic directly, including money to accelerate vaccine deployment and to safely reopen most schools within 100 days,” The New York Times explained in a story outlining Biden’s $1.9 trillion plan.

If $400 billion of Biden’s plan will be spent “to combat the pandemic directly,” where will the remaining $1.5 trillion go?

So, state and local governments that are already taxing the incomes, property, and the retail purchases of hardworking Americans would get additional money from the federal government that Biden would need to borrow to give them.

For generations to come, working Americans would be taxed to pay the interest on this new debt Biden wants the federal government to incur.

“Biden would expand the payments to cover all adult dependents, rather than just children, while keeping the existing phaseout thresholds at $75,000 for individuals and $150,000 for joint filers,” reports the Congressional Quarterly.

So, a married couple with no children and a combined income of $149,000 would get $2,800 from the federal government.

Of course, because the government is already running a deficit, all of this new spending would be done with borrowed money.

In just the last two presidencies, the federal debt has risen by $17.1 trillion—or about 161%.

The COVID-19 pandemic was caused by a lethal virus this nation has sacrificed much to control. Our runaway federal government is caused by politicians we do not control enough.