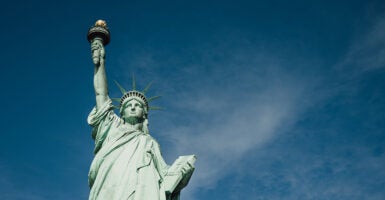 Now is the time for conservatives to work all the harder to articulate a vision to help bring our divided nation together. (Photo: Cavan Images/Getty Images)

We often hear calls for national unity when presidents are inaugurated. And we’re sure to hear them again, despite the fact that we are still divided, red and blue, liberal and conservative, coastal city and heartland town.

But we should not despair. We’ve been divided since the birth of the republic, when the Federalists and the Anti-Federalists, the Hamiltonians and the Jeffersonians, fiercely debated our form of government. In the end, guided by the Declaration of Independence and the Constitution, we came together.

Our divided nation fought a terrible Civil War, pitting brother against brother. But in the end, we came together so that government of the people, by the people and for the people would not perish.

For the next eight decades, we accepted a limited role for government until a Great Depression—and a great war—persuaded us to accept a larger role.

Five decades on, we debated and then decided to take a giant step toward limiting our government under the Reagan administration. Let us not forget the era when we restored Americans’ confidence in themselves and the future, engineered a period of unparalleled economic prosperity, and won the Cold War without firing a shot.

For the last 30 years, we have debated and divided over the question of what we want from our government. Conservatives, led by groups such as The Heritage Foundation, made the case that government is best which governs the least, and we found a receptive audience for our policy and personnel recommendations in presidential administrations.

In just the past four years, conservatives have achieved great things: the confirmation of three justices to the Supreme Court, a significant tax cut (for all Americans—not just the wealthy), unprecedented peace deals in the Middle East, the restoration of our military, and a deregulatory policy that precipitated historic economic growth.

Each time, like the fabled phoenix, we rose from the ashes of defeat and, committed to the priceless principle of ordered liberty, brought about Reagan’s landslide victory in 1980, and Newt Gingrich’s Contract with America in 1994.

Now, in the wake of a fiercely fought election and a disappointing end, conservatives have a special role and responsibility—to oppose a progressive agenda that promises more government programs and regulations, more taxes and spending, that would take us down the road to socialism.

At this time, it is up to conservatives to seize the opportunity to preserve and protect the American idea of limited constitutional government, free enterprise, individual freedom and responsibility, traditional American values based on our Judeo-Christian heritage, and a strong national defense that will guarantee peace.

These ideas have served our nation and the American people well for 244 years. Now is the time for conservatives to have faith and to work all the harder to articulate a vision based on these ideas and to help bring our divided nation together.

Can we do it? Of course, we can. After all, we are Americans.