6 Officers Cited for Heroism at Nashville Blast Site Before Explosion 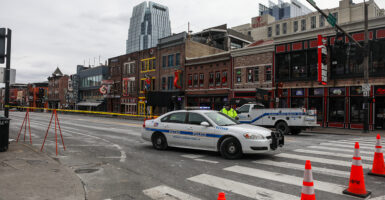 Six Nashville police officers were hailed as heroes after they rushed to evacuate residents prior to the Christmas Day explosion that rocked a downtown area, a law enforcement official said.

“These officers didn’t care about themselves,” Metro Police Chief John Drake said, according to Fox 17. “They didn’t think about that. They cared about the citizens of Nashville. They went in and we’d be talking not about the debris that we have here, but potential people.”

“These officers’ acts of heroism [are] just tremendous,” Drake said.

The six officers were responding to a “shots fired” call nearby when they spotted a suspicious recreational vehicle blaring an announcement that a bomb would detonate, the local outlet reported.

The officers knocked on residential doors and rushed people out of their homes prior to the massive explosion, according to Fox 17.

The @MNPDNashville police department has released the names of six of the officers who heroically worked to evacuate downtown Nashville prior to today’s massive explosion, saving several lives in the process. pic.twitter.com/2YWp356xMs

Authorities called the blast, which took place around 6:30 a.m. Christmas morning,  “an intentional act.” Investigators released an image of the RV driving through city streets prior to the bombing.

BREAKING: This is the RV that exploded on 2nd Ave N this morning. It arrived on 2nd Ave at 1:22 a.m. Have you seen this vehicle in our area or do you have information about it? Please contact us via Crime Stoppers at 615-742-7463 or online via https://t.co/dVGS7o0m4v. @ATFHQ pic.twitter.com/JNx9sDinAH

Nashville was under a citywide curfew following the explosion, and officials called in the FBI to spearhead the investigation, according to Fox 17.

The suspected bomber and RV driver, Anthony Quinn Warner, was killed during the explosion, which damaged dozens of businesses around a prominent city strip, the FBI said, according to ABC News.

Human remains were found in the beginning stages of the blast investigation and later were confirmed to be those of Warner, ABC reported.

No other deaths apparently resulted from the explosion.