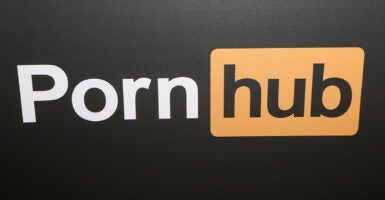 Haley McNamara: Thanks so much for having me.

McNamara: It’s a very serious problem. Unfortunately, we can’t say metrics, we can’t say a percentage of the videos, but we know that it’s a big problem.

The fact that it’s an unverified video, it means that we don’t know, which probably means that there’s a really real chance that that is nonconsensual material.

McNamara: Yes. It’s the culmination of a lot of different people’s work. First and foremost, the survivors who’ve been brave enough to be speaking out about this.

Some survivors were quoted in The New York Times article. Also, Rose Kalemba is a survivor whose sexual abuse videos were uploaded. And she had a fantastic article in the BBC earlier this year that had tremendous reach and was really impactful as well.

So I would say it’s kind of the culmination of survivors, our organization, Exodus Cry, and so many other advocates too, who are just speaking out about this issue. So it’s all kind of coming together at the same time, which is really exciting. It’s great to see the dominos starting to fall here.

I want to talk more about some of the stories that are included in the article. But first off, can you just tell us a little bit about the article and your takeaway from it?

McNamara: Right. It’s a really impactful article. I encourage anyone to go and to read it. It’s great because it lays out what the problem is. And he even mentions in his article the questions that companies like credit card companies are still partnering with the pornography industry. But it basically just lays out the case of several survivors who’ve had their abuse videos uploaded.

And so it’s very impactful. It’s really created a seismic shift in the culture. Because people have been talking about this before. Our organization, survivors, others, have been almost screaming at the top of our lungs trying to get people to care about this issue. But it really took this piece to bring it into the public eye and to make other people feel like they can talk about it. So it’s been really helpful for our movement.

Del Guidice: [Were] there any particular stories that he raised that stuck out to you, or just any other takeaways that you saw as you were looking at this that really illustrate why you do the work that you do?

McNamara: Well, one of the survivors in the piece commented, … I’m butchering it, please go and read it in her words, but that she was trafficked for a period of a couple of years in her life, but that her abuse is now ongoing because it’s been uploaded onto this website. And that’s the same story that we hear from so many survivors.

A lot of survivors from the pornography industry or survivors who’ve had pornography made of them in different exploitation circumstances have a really hard time coming forward and speaking about it.

You don’t hear from them that often because they know that people will go and look up their videos. And so they know that if they speak out, in a way, their exploitation, their abuse will be viewed by even more people. It’s so brave for people to be speaking out about it now. And it’s so important. And it’s leading to lasting change.

McNamara: It’s a very, very big problem. As the world has gotten more connected to the internet, and especially during COVID, our lives are happening online. And so exploitation is happening online even more so as well.

We see so many ways that this intersects with different issues. Often, young girls will be pressured to send sexually explicit images or videos of themselves. Those might be uploaded to a pornography website, or they might be used as extortion to either abuse them or to even sex traffic them. That is a very common situation.

Or many people who are sex trafficked, the sex buyers, or the traffickers, are taking videos of them during that abuse and either sharing them or uploading them to the internet. There’s so many different ways that this can happen, but it’s unfortunately a very, very common trend. It’s a really huge problem. And it’s so important the people are starting to hear about it more and talk about it more.

I think we need to normalize this as a conversation, that if you’re watching pornography, you don’t know if that person is being abused in that very moment.

So we cannot trust them. And you’re right, they should not be able to regulate themselves. So that’s one important thing.

And then the other important thing that I would say is that we do also have to remember that pornography production causes physical and mental trauma to the performers.

This is something that a lot of people don’t talk about, but there’s been research showing that individuals who are used in the process of pornography have worse mental health than the general population. They’re more likely to live in poverty. That’s probably the reason that they’re engaging in that in the first place. There’s some economic coercion there. And that they’re exposed to serious physical harm, even beyond STDs.

So much pornography portrays violence against women. Pornography is not staged. What is happening in that video is actually happening to that person.

Hopefully your listeners haven’t been researching the pornography industry to the extent that we’ve all had to. But if you look at the structure of the marketplace of pornography, to the average viewer, it would look as if there’s just thousands and thousands of unrelated pornography websites. But actually if you zoom out and look up, there’s only a couple mega corporations that are running all of these different websites. MindGeek being the largest.

And they also … host their own advertisers. They’ve created their own payment processor. So they’ve really built up this ecosystem of companies, all surrounding pornography. And this corporation is pulling in hundreds of millions of dollars every year. So it is it’s global. It’s very global.

They’re powerful. They’re upset about all of these changes that have been happening. But I think it’s helpful for people to think about that and realize this isn’t an issue about free speech or self expression. This is about a mega corporation that is facilitating exploitation in order to make money. That’s really what their goal is.

What should happen here, Haley? And do you know any updates on where this effort is at?

McNamara: I don’t have any updates, but I know that we have also written in and asked for there to be investigations. We think it’s critical that there are investigations.

If we’re not going to go after some of these online companies who are intentionally facilitating this content, then what’s the point of law enforcement, right? This is such a critical thing for us to start enforcing.

And then also in February, we are launching our 2021 Dirty Dozen List, which names 12 mainstream companies that are facilitating sexual exploitation and abuse.

Del Guidice: Haley, thank you so much for being with us today and for really unpacking a tough issue, but one that needs to be discussed. We appreciate having you.

McNamara: Thanks so much for having me.