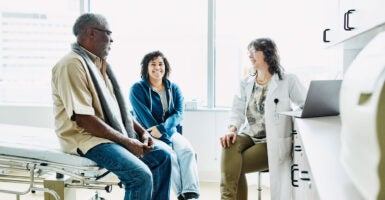 Be prepared for delays and denials of medical care, if self-styled “progressives” in Congress abolish all private health coverage and enact a federal government program of national health insurance, all in the name of “free care for all.”

In a hefty 206-page report, the Congressional Budget Office posits five scenarios in estimating the costs of such a program based on Medicare payment rates in 2030. The big report focuses on a variety of issues, such as provider payment and program design; and the different assumptions underlying five scenarios yield different results.

For most Americans, however, the most vital issue is timely access to medical care. On that point, the Congressional Budget Office analysts conclude:

No one should be surprised.

Medicare payment for doctors, nurses, and other medical professionals is well below private sector rates. Government-imposed lower payment rates and the provision of care “free” at the point of service induces increased demand.

These Medicare payment reductions and caps can also reduce the supply and the availability of services. With the abolition of viable private alternatives for coverage and care, patients would be forced to wait longer for care or go without it altogether.

In describing this “unmet demand” for medical services, Congressional Budget Office analysts anticipate that the government’s national health insurance program would be characterized by “congestion.”

According to the Congressional Budget Office report:

Increased congestion would affect access to care by causing delays in treatment or longer travel times, particularly for specialty care. Under the single payer options, patients would continue to make appointments and pay any required cost sharing, as under current law. But increased congestion would mean that some patients would have more difficulty finding an available provider.

How many people would be, in Congressional Budget Office lingo, in that unlucky category of “some” people?

The United States is a huge country with a large and diverse population of 331 million. At this point, it would be hard to predict how many Americans would find their future access to care delayed or denied because of a backlog of waiting patients clogging the corridors of hospitals and other medical facilities.

Based on the experience of such “health system congestion” in other countries, however, the number would be undoubtedly large.

Waiting times for care in “model single-payer” Canada are the worst among economically advanced nations. This is especially true for patients in need of specialized medical care; a point the Congressional Budget Office raises in connection with a potential American version of a similar system of national health insurance.

According to a 2018 report in the Journal of the American Medical Association, 39% of Canadian patients had to wait more than two months to see a medical specialist, compared to only 6% of American patients.

Then, there is “single-payer” Britain. In 2019, 4.4 million British patients were on the waiting lists of the British National Health Service. With the onset of the COVID-19 pandemic, The Guardian, a left-leaning British newspaper, reports that yearlong waits for surgeries in England are the highest since 2008, and that total waiting lists could reach nearly 10 million.

While access would increase for some who had no insurance or those with large out-of-pocket costs, according to the Congressional Budget Office, it would decline for those who had private coverage with modest cost sharing or reside in areas where the likely “congestion” would be greater. Think big cities.

The Congressional Budget Office concludes that under all five of the scenarios projected, demand would exceed the supply of medical services.

In short, you can forget “free care for all.”