7 Takeaways From a Senate Panel’s Hearing on Election Fraud 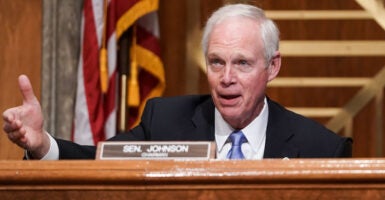 The Senate Homeland Security and Governmental Affairs Committee on Wednesday held its first hearing looking into the issues of vote fraud and other irregularities surrounding the 2020 election.

Johnson said the hearing was about ensuring confidence in the electoral system and getting to the facts. The hearing included testimony from legal and election security experts, as well as from witnesses from the hotly contested states of Pennsylvania, Wisconsin, and Nevada.

The hearing came two days after former Vice President Joe Biden won in the Electoral College with 306 votes to President Donald Trump’s 232. A minimum of 270 votes is needed to win. However, Trump has not conceded the race.

Here are seven takeaways from the hearing.

1. Fraud Didn’t Alter Result, or Did It?

On Tuesday, Johnson said, “I haven’t seen anything that would convince me that the results, the overall national result, would be overturned.”

But on Wednesday, he emphasized that legitimate concerns about voter fraud should have an airing.

“Today, we will hear testimony on how election laws in some cases were not enforced and how fraudulent voting did occur, as it always does,” the chairman said, adding:

The question that follows us is whether the level of fraud would alter the outcome of the election. This year, in dozens of court cases, through the certification process in each state and by the Electoral College vote, the conclusion has collectively been reached that it would not.

However, lax enforcement, denying bipartisan observation of the complete election process, and failure to be fully transparent or conduct reasonable audits has led to heightened suspicion.

The media and Democrats heralded a statement that called the 2020 election “the most secure ever.”

However, Christopher Krebs, the former director of the Cybersecurity and Infrastructure Security Agency, stated several times that his agency was not directly addressing fraud, which would be a criminal matter.

The Cybersecurity and Infrastructure Security Agency, a division of the Department of Homeland Security, focuses on foreign election meddling, hacking, disinformation campaigns, and other matters.

“Despite some claims, this statement does not address voter fraud, which is not within this group’s ambit,” Krebs told the committee. “Instead, the statement focuses on manipulation or hacking of the machines supporting elections.”

Krebs said it wasn’t his agency that issued the statement.

“To ensure the facts are clear, this was not a CISA statement, but rather a joint statement from the election security community, reflecting the consensus of that community, that CISA published,” he said.

He was later asked about whether he identified election irregularities. Krebs said he stood by his view that it was the most secure election in American history.

Sen. Gary Peters, D-Mich., the committee’s ranking member,  complained immediately that the hearing was “a platform for conspiracy theories and lies.”

That subsequently prompted Johnson to respond to lies that he said Peters and other senior Democrats told about him and Sen. Charles Grassley, R-Iowa, chairman of the Senate Finance Committee.

Peters had claimed Johnson and Grassley were working with Russians to promote disinformation about Hunter Biden, son of the former vice president.

“Senior Democrat leaders, including Peters, were involved in a process of creating a false intelligence product that was supposedly classified. They leaked it to the media, that accused Sen. Grassley, the president pro tem of the Senate, and myself of accepting and disseminating Russian disinformation from Andrii Derkach,” Johnson said. “I never heard of the person until they brought it up. Sen. Peters introduced that false information, Russian disinformation, into our investigation record.”

“Mr. Chairman, I’ve got to respond to that,” Peters said. “You’re saying I’m putting out misinformation. I had nothing to do with this report.”

Peters again shouted at the chairman.

“Mr. Chairman, this is not about airing your grievances,” the Michigan Democrat said. “I don’t know what rabbit hole you’re running down.”

Johnson said, “It is what you have done to this committee, falsely accusing the chairman of spreading disinformation. Nothing could have been further from the truth.”

James Troupis, a lawyer for the Trump team in Wisconsin, described what he said were several problems. One was that in Madison, Wisconsin, 17,271 ballots were received through improper and illegal means, unsupervised, in violation of statute. They were commingled with legitimate ballots.

“Three million people properly voted in Wisconsin,” Troupis told the committee. “More than 200,000—identified in this recount—did not. But those votes got counted. Our statutes say they should not have been. That, in our view, is a taint on our election in Wisconsin.”

As if to put that number in context, Johnson noted, “Joe Biden won our state by about 20,000 votes.”

Some mail-in voters also identified themselves as “permanently confined,” meaning they were unable to leave their homes to go to the polls. However, that included poll workers and an elector for Biden in the Electoral College, Troupis said.

“We had people who went to protests, people who had vacations, people who had weddings. All claimed this status, ‘I can’t get to the polls,’” Troupis continued. “So, they were allowed to vote without identification. There were 28,395 people we explicitly identified. Finally, there are other categories in which as much as 170,000 other ballots were submitted without any application.”

Jesse Binnall, a Nevada lawyer for the Trump campaign, said changes to voting made by the Nevada Legislature in August caused the number of mail-in ballots to increase nearly tenfold from 70,000 in 2016 to more than 690,000 in 2020. That opened the door to more fraud, he said.

“While the media and the Democrats accused us of making it all up, our team began chasing down every lead,” Binnall told the senators. “Our evidence came both from data scientists and from brave whistleblowers.”

Binnall said in Nevada more than 42,000 people voted more than once, which the legal team determined by reviewing the list of actual voters and comparing them to other voters with the same name, address, and date of birth. The lawyers also determined people used different first names, such as William and Bill, to vote more than once.

Nor was it just live people, he said.

“At least 1,500 dead people are recorded as voting, as shown by comparing the list of mail voters with the Social Security death records,” Binnall said.

He said more than 19,000 people voted in Nevada despite not living in the state, noting that that number didn’t include student or military voters. The numbers were identified by comparing the lists of voters with the U.S. Postal Service’s national change-of-address database, among other sources.

About 8,000 people voted from nonexistent addresses, while more than 15,000 votes were cast from commercial or vacant addresses, he said. Further, about 4,000 noncitizens also voted, according to information determined by comparing official Department of Motor Vehicles records of noncitizens to the list of voters in the 2020 election.

Pennsylvania state Rep. Frank Ryan, a Republican, outlined a number of objections he had with the tabulation in his state from the Pennsylvania Department of State.

“The mail-in ballot system for the general election of 2020 in Pennsylvania was so fraught with inconsistencies and irregularities that the reliability of the mail-in votes in the commonwealth of Pennsylvania is impossible to rely upon,” Ryan said.

The number of ballots reported to have been counted was an impossible 508,112 ballots, despite the fact that only 432,873 ballots had been issued to voters in that county.

Later that day, the ballots-counted number was reduced, but this begs the question: Who had the authority to add and subtract votes on the ballot counts reported to the Department of State?

Ryan said, “Even if this was simply a data entry error, the lack of internal controls over such reporting necessitates a review of the numbers, the process, and system access.”

Suspicion over mail-in voting is hardly new, said former federal Judge and former U.S. Solicitor General Ken Starr, who testified at the hearing to provide a legal and constitutional assessment of the postelection struggle.

But Starr said it reached an “unprecedented” level in 2020 and has “given rise to a number of questions that deserve to be answered.”

“I want to close just by a reminder in history. There was in fact a campaign—an illicit campaign—to deprive Abraham Lincoln of the presidency. That was through the use of mail-in ballots,” he said.

It wasn’t successful, however. Democrats pushed mail-in voting in hopes of beating the Republican presidential incumbent in the 1864 election.

Starr also referenced the 2005 report from the Carter-Baker Commission warning about the dangers of fraud posed by absentee ballots.

“In the spirit of the Carter-Baker Commission, it is wise of us, in the warning that they had with respect to mail-in ballots, to pause and reflect how we can better ensure that bedrock factor and feature of integrity in the election process,” he said.