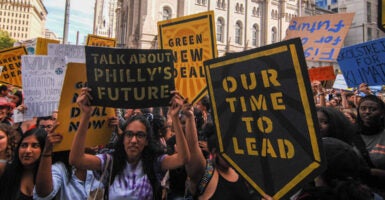 Other elected officials in Pennsylvania continue to question the constitutionality of Gov. Tom Wolf’s proposed carbon tax in the run-up to 10 public hearings that begin Tuesday on the disputed regulations to address climate change.

The Pennsylvania Environmental Quality Board has approved a “cap and trade” plan to cap carbon dioxide emissions from power plants.

The plan, which the board OK’d in mid-September, would require power plants to obtain carbon dioxide allowances equal to the amount of the greenhouse gas they emit. Electric utilities that emit more than their assigned cap would have to purchase allowances at an auction to offset the excess.

Elected officials in both parties, however, say that Wolf is circumventing the Pennsylvania General Assembly in an effort to impose taxes that only the state lawmakers can approve or reject.

“I think we’ve kind of exhausted our options legislatively,” state Rep. James Struzzi, a Republican, said in an interview with The Daily Signal. “I think this will come down to the courts.”

Wolf’s secretary of environmental protection, Patrick McDonnell, is chairman of the 20-member Environmental Quality Board. With representatives from 11 state agencies, the board is charged with adopting the Department of Environmental Protection’s regulations.

Wolf, a Democrat, first took executive action in October 2019 by calling on his Department of Environmental Protection to draft regulations so the commonwealth could join a multistate climate compact called the Regional Greenhouse Gas Initiative.

But seven of Wolf’s fellow Democrats co-sponsored a House bill requiring the governor to submit his carbon tax plan to the General Assembly. The House vote to pass the bill was six votes shy of a veto-proof majority.

The state Senate vote was one vote shy of a veto-proof majority, with five Democrats supporting the bill.

‘Blatant Disregard for the Legislature’

The Regional Greenhouse Gas Initiative, widely known as RGGI, includes 10 New England and Mid-Atlantic states where government agents compel electric utilities to purchase carbon allowances at quarterly auctions whenever the utilities surpass the cap on emissions established by the agreement.

The cost of carbon dioxide allowances increased by 18.6% in the most recent auction, according to RGGI. Allowances sold for $6.82 per metric ton in the third quarter of this year, $1.07 higher than the prior quarter.

The auction raised $110.4 million, an amount that will be added to consumer electricity bills in the 10 participating states, which include Connecticut, Delaware, Maine, Maryland, Massachusetts, New Hampshire, New York, Rhode Island, Vermont, and, in 2021, Virginia.

“There are two thoughts I like to highlight when I speak to people about this topic,” state Rep. Jonathan Fritz, a Republican from Honesdale who represents the 111th District, told The Daily Signal. “First, RGGI is a tax and it is a cap-and-trade [system], and as a result RGGI increases costs for energy and those costs get passed on to the consumer.”

“And, secondly,” Fritz said, “out of all the states in RGGI, Pennsylvania would be the only one that becomes a member through unilateral action by a governor, and that blatant disregard for the Legislature is profoundly frustrating.”

Last month, the Pennsylvania House’s Environmental Resources and Energy Committee adopted a resolution urging the state’s Independent Regulatory Review Commission to reject the proposed cap-and-trade regulation. The measure has not yet made it to the House floor.

The General Assembly created the Independent Regulatory Review Commission in 1982. Its stated mission is to “review regulations to make certain that the agency has the statutory authority to enact the regulation and to determine whether the regulation is consistent with legislative intent.”

Struzzi, who represents the 62nd District in Indiana County, said he is not optimistic about next steps as he predicts that the courts will resolve the standoff.

Struzzi was the lead sponsor of the bill on the House side that would have prohibited the governor from entering RGGI without legislative approval. Wolf vetoed that bill as well as the Senate version in September.

In his veto message, Wolf described the legislation as “extremely harmful to public health and welfare.” The governor said it would prevent the state’s environmental regulators from taking action to “abate, control, or limit carbon dioxide emissions” without the General Assembly’s prior approval.

However, a memo from Struzzi and Rep. Pam Snyder, a Democrat representing the 50th District in Carmichaels, reiterates the position of elected officials in both parties that Wolf “does not have the unilateral authority” to impose a carbon tax.

That action, they write, qualifies as a “major energy fiscal policy decision” that falls within the purview of the legislative branch. Their memo is attached to the House resolution opposing Pennsylvania’s participation in the greenhouse gas initiative.

“With the difficult times we are living in with COVID-19, and now with the holidays, it’s very telling that the governor is continuing to move forward his regulatory plans,” Struzzi told The Daily Signal, adding:

We had bipartisan support for the House bill that basically said the Legislature should have a role in making these decisions because we represent the people, but this clearly has not occurred. We don’t want to see this proposal for RGGI move forward unless it is properly vetted in the Legislature.

Environmental and energy policy analysts from outside Pennsylvania also have expressed concern that Wolf is overstepping his authority to impose policy changes, without legislative input,  that will have significant and enduring consequences for state residents.

“Joining the Regional Greenhouse Gas Initiative commits Pennsylvanians to paying higher electric rates in the future,” Myron Ebell, director of the Center for Energy and Environment at the Competitive Enterprise Institute, a Washington-based libertarian think tank, said in a recent public statement.

“For the governor to join RGGI when the people’s representatives in the state legislature are overwhelmingly opposed is irresponsible, and if it’s not illegal, it should be,” Ebell said.

James Taylor, president of The Heartland Institute, a free market think tank based in Illinois, is just as blunt.

As a practical matter, joining RGGI would raise energy prices, raise taxes, and kill energy-producing jobs throughout Pennsylvania. Any claims that carbon dioxide restrictions create jobs and lower energy costs are directly contradicted by the fact that government has to pass laws to force people and businesses to abandon conventional energy. People and businesses don’t deliberately fritter away money. Especially during uncertain economic times like the country is currently experiencing, Pennsylvanians need policies that lower energy costs and preserve coal, oil, and natural gas jobs. Joining RGGI does exactly the opposite.

The Institute for Energy Research, a nonprofit based in Washington that favors free market policies in the energy sector, cites figures that show electricity prices in RGGI states are 50% higher than those in Pennsylvania.

Since Pennsylvania already is a net exporter of electricity and a top producer of natural gas, which helped the commonwealth to lower carbon emissions, Fritz said, he views RGGI as an “expensive regulatory burden” that runs counter to the state’s interests.

Pennsylvania’s carbon emissions have dropped by more than 30% since 2009, the year RGGI was established, according to news reports.

“I feel as though the governor is taking this action because he hasn’t been able to get his severance tax and in order to pacify his overzealous environmental supporters, this was his next best option,” Fritz said.

The proposed severance tax would be imposed on natural gas extraction in the Marcellus Shale, a geological formation that cuts across a large portion of Pennsylvania. The Commonwealth Foundation, a free market think tank in Harrisburg, put together an analysis of the potential impact from Wolf’s severance tax.

“We will use any mechanism possible to place roadblocks against the governor’s unilateral actions on RGGI,”  Fritz said. “If that doesn’t create the results we need for Pennsylvanians, then this is going to the courts.”

Power PA Jobs Alliance, a coalition of labor unions, industry, and “consumer stakeholders” opposed to entering the multistate compact estimates that RGGI would impose about $2.4 billion in carbon taxes over 10 years on Pennsylvania’s coal and natural gas plants.

“Pennsylvania ratepayers will be forced to absorb the $2.4 billion RGGI tax, and low-income households will be disproportionately impacted,” the coalition argues on its website, adding:

Thousands of family-sustaining blue collar and union jobs will be lost, school district property tax revenues will plummet, and Commonwealth tax revenues will decline from the loss of income taxes and shuttering businesses. This is why more than a dozen Pennsylvania labor unions, including the Pennsylvania AFL-CIO and the State Building and Construction Trades, oppose RGGI.

The Daily Signal sought comment from Wolf’s press office and the state Department of Environmental Protection on the Power PA Jobs Alliance’s estimates for the carbon tax.

The Wolf administration’s own estimates reportedly show that the tax from selling allowances would generate $2.36 billion over the next decade, which energy consumers would pay through their electricity bills.

At publication time for this report, the governor’s representatives had not responded.

The state’s Department of Environmental Protection has a web page with details about the environmental, health, and economic benefits that Wolf argues RGGI will deliver to Pennsylvania. It includes testimony from the department’s head, McDonnell, who describes climate change as “the most critical environmental threat facing the world.”

In making the case for the multistate compact in testimony to a joint legislative committee on pollution and conservation, McDonnell warns of “dire projections” that suggest state residents will feel the brunt of climate change in the not-too-distant future:

Although McDonnell identifies carbon dioxide as the major culprit behind climate change, several scientists and researchers who testified before the General Assembly in recent months dispute these claims.

“We are not in a CO2-driven climate crisis,” Caleb Stewart Rossiter, executive director of a Virginia nonprofit called CO2 Coalition, testified in August. “That is a scientific fact. Some models predict we may be in [a crisis] in a hundred years, but even their estimated damages pale next to the fossil-fueled increase in wealth we have on hand to address them. And remember, there are benefits to CO2 emissions, since the molecule is a crucial plant and plankton food.”

The Heritage Foundation’s Kevin Dayaratna, the think tank’s principal statistician and data scientist, told a House committee in October 2019 that the governor’s proposals would have very little if any effect on temperatures and the climate, but raise costs considerably.

>>> Related: Why Progressive Activists Want to Silence the Truth About Climate Change

Details about the Environmental Quality Board’s virtual public hearings on RGGI, which begin Tuesday and run through Dec. 14, are available here.

A public comment period began in November and will end Jan. 14. Comments may be submitted online or by emailing  [email protected]