5 ‘Terrifying’ Policies to Brace for Under Biden 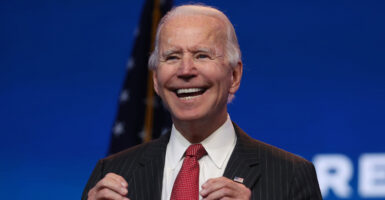 Donald Trump has been a unique president for a lot of reasons, but one in particular: he keeps his promises.

Anyone who’s seen former Vice President Joe Biden’s priorities has to be praying he doesn’t become president. They make Hillary Clinton, who ran on the most extreme platform of any candidate in history, look like a Sunday School teacher.

And unfortunately, Biden’s agenda isn’t a collection of radical policies we think he’ll push. These are things he’s said he’ll do. And as CNS News’ Terry Jeffrey points out, it’s a terrifying list.

Most conservatives don’t want to think about a Biden presidency—let alone what it would mean for our country. But as the clock ticks on and the election drags out, we can’t ignore what might be around the corner if the former vice president takes the reins.

Based on what we’ve outlined to people over the past several months, it will be an all-hands-on-deck moment for every God-fearing, freedom-loving American in the country.

Now, Jeffrey must have been limited on space, because he only highlights “5 evil things” Biden plans to do as president. If you’ve read the Biden-Sanders manifesto or perused Biden’s campaign website, you know there are many, many more.

For now, though, Christians, pro-lifers, and anyone who cares about freedom needs to brace themselves for these significant moments—and be prepared to fight back.

The very first, Jeffrey explained on “Washington Watch” on Wednesday, is to codify Roe v. Wade—making it impossible for states to limit or ban abortion for any reason. “Joe Biden wants a federal law that makes abortion nationwide a quote-unquote ‘right.’ Which I say is evil.”

And, to add to that evil, he wants to force every American to pay for it.

That’s No. 2: Biden wants to end the Hyde Amendment. In other words, every federal spending bill could be used in some way to fund abortion. The pro-life Hyde Amendment, which has stood in the way of that radical free-for-all for more than 40 years, would be gone, Jeffrey said.

Beyond that, he wants to create a ‘public option’ under Obamacare, which he describes as a Medicare-like health insurance plan that would cover abortions. So, in two different ways … he would make everybody who pays taxes in America fund abortions.

And then he would go beyond that to force businesses, private family-owned businesses to provide health insurance that covers abortion-inducing drugs.

No. 3: Biden would reinstate the Obamacare mandate, demanding that every business and nonprofit cover abortion-causing pills and contraception in their health plans.

As Jeffrey points out, “Unfortunately, the Supreme Court never really settled that issue, [so] this is a place where Joe Biden right away could do some serious damage.”

No. 4: Biden says that on Day One, “he’s going to force public schools and colleges to treat biological males as if they’re females. He literally says they’re going to have to let transgenders pick their own gender identity … So literally, Joe Biden will order public schools to say that anatomical males can play on the girls sports teams, use the girls’ shower rooms, and use the girls’ restrooms. Completely outrageous, absolutely evil.”

Last but certainly not least, the Obama vice president says he would order insurance companies to cover gender-reassignment surgeries—not only for adults, but young, impressionable children. Similar to [the] Hobby Lobby case, he’d make family-owned businesses provide that “treatment,” which is actually mutilation.

“These issues, particularly those last two,” Jeffrey said, “did not get nearly the kind of exposure and discussion they deserved before the election. I think there are many Americans who have no idea that Joe Biden is going to order public schools to let boys play on their girls sports teams and let boys use the girls’ locker rooms.

“To me, that’s such a huge [overreach]. And it’s not just evil. It shows a distortion of [Biden’s] mind and heart. And I don’t think there’s any way he could defend it … .”

Some of these things, of course, he can’t do without Congress’ help. And that’s where you and I come in—encouraging our senators and congressmen to stand firm.